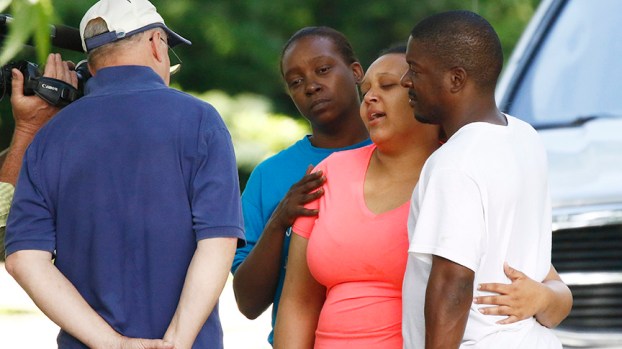 Photo by Rogelio V. Solis, AP/Christianna May Kelly, center, is supported by family members as she answers a reporter’s questions outside her parents home in Brookhaven, Sunday. Kelly said both her parents, Ferral Burage and mother Shelia Burage were among the eight people gunned down during what is believed to be a three-part killing spree that began in the county Saturday night.

Christiana May Kelly talked to her mother, Sheila Burage, every morning.

Burage, 46, and Kelly’s stepfather, Ferral Burage, 45, were fatally shot Sunday morning at their home on at 312 East Lincoln Road in Brookhaven.

The Burages were two of eight people Willie Cory Godbolt of Bogue Chitto is accused of killing over the weekend.

For Kelly, the pain of losing a mother and stepfather is indescribable.

She said losing her stepfather has been equally as painful.

“He was just like my mom. He was a wonderful man,” Kelly said. “He took my mother and her three children and treated us like we were his own.”

Her favorite memory of him was on Father’s Day last year.

“My biological father passed in 2006 of lung cancer,” said Kelly. “I was just having a bad day that day. “He called me and told me that he loved me and I didn’t have to feel the way I did because I did have a father. He told me that he would be my father even though he’s not my biological father. He said he would always be there for me. He was my father and I will just never forget that day. Me and my sisters loved him like he was our real dad. He took care of us.”

As far as a motive behind the killings, Kelly still doesn’t have an answer.

“I have no clue,” she said. “All of the victims were family. This was something that could have been prevented. I feel like everybody’s house that he was going to, he thought that we intervened in his marriage with his wife and kids.”

During tough times, Kelly and her family find strength in numbers and knowing that they will see her parents again.

“I know for sure that I will see her again one day,” she said. “I don’t know if we’re going to know each other as mother and daughter, or are we just going to know each other as sisters in Christ. I’m most definitely looking forward to that day. My mother was a strong woman who believed in God. You have to have faith and believe is something she would always say. She was just a beautiful soul.” 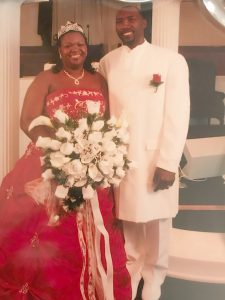 Photo submitted/Pictured are, from left: Sheila and Ferral Burrage, two victims of the series of shootings that took place Saturday and Sunday. The Burages were killed at their home on East Lincoln Road in Brookhaven.

Jordan Blackwell, 17, was killed in a shooting spree that left eight people dead in Lincoln County over the weekend.... read more