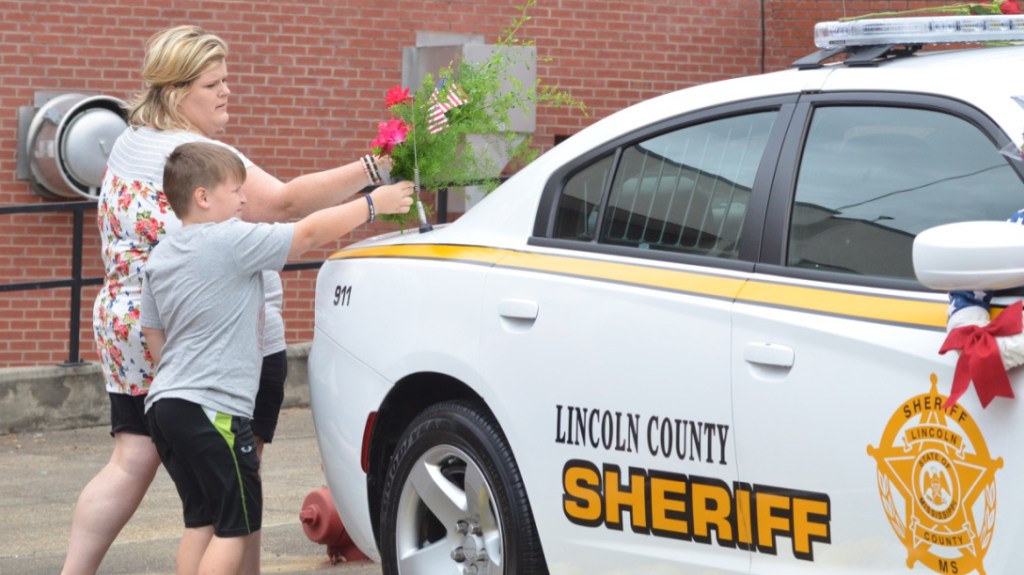 Photo by Matt Rushing/Members of the community are leaving remembrances on the patrol car of fallen Lincoln County Sheriff’s deputy William Durr, parked outside the sheriff’s office in Brookhaven.

A Lincoln County Sheriff’s deputy would want life to go on and his family is trying to honor that request.

Deputy William Durr, 36, was shot to death late Saturday night answering a disturbance call. The suspect, Willie Cory Godbolt, was charged Tuesday with capital murder for Durr’s death as well as seven counts of first degree murder for the other individuals he’s accused of shooting to death that night and into Sunday morning: Barbara Mitchell, 55, her daughter, Tocarra May, 35, and Mitchell’s sister Brenda May, 53, all of Bogue Chitto; Austin Edwards, 11, and his cousin, Jordan Blackwell, 17; and Sheila Burage, 46, and her husband, Ferral Burage, 45.

In this time of tragedy, Durr’s family is planning a happy event — his sister’s wedding.

Durr was set to give the bride away Saturday as Megan Durr marries Lawrence County High School coach Adam Cook. He was even planning to perform the nuptials, said his mother, Debbie Durr.

They will go ahead with the ceremony.

“William would have wanted it,” she said.

Durr’s mother authorized the following statement from the family:

“William Durr was a wonderful husband, father, son, brother, son-in-law, brother-in-law and uncle to our family. He was a terrific friend to many. He served his Lord with his entire being. His love for others was portrayed in his service in law enforcement. William enjoyed life because he truly wanted to be a blessing to others.

“William had a love for young people. He served various churches in numerous positions. His work with preschoolers, children, youth and college students rendered dividends many will not fathom. Only God Himself knows the true extent of William’s kingdom work. His service to God was not reserved for Sundays alone. Time and again, William would share God’s love to those he encountered while serving as a deputy sheriff or police officer. He would take the time and pray for those in need of God’s love and peace.  His love for others knew no boundaries.

“William will be missed by all who knew him. His legacy of love and service will live long after his body is no longer here.”

Durr’s family suggests that those who want to honor his memory do so through two programs he supported. Memorials can be made to Blair E. Batson Children’s Research Hospital, 2500 N. State Street, Jackson, MS 39216, in memory of Deputy William Durr, in honor of Amelia Price.

Memorials can also be made to the Bogue Chitto PTA Playground Fund.

Family friend Ronny Hart, a third grade Bogue Chitto teacher and president of the PTA, said Durr loved kids and would want to help the playground at the school, which needs to be relocated. Donations can be given to secretary Darlene Miller at the school office during business hours or mailed to the school at 385 Monticello St. SE, Bogue Chitto, MS 39629. Checks should note that the donation is for the playground fund in memory of Durr.

An account authorized by the family has also been established as the William Durr Memorial Fund at Trustmark Bank.

Durr’s co-workers are still in shock at his passing.

“There was never a negative word that came out of his mouth,” Porter said. “He was what kept everyone else looking up and thinking positive. He was always witnessing to people and telling them how much he loved the Lord. He wanted people to be close to the Lord.”

Porter said Durr had a passion for making kids smile.

“He was excited about starting a D.A.R.E. (Drug Abuse Resistance Education) program in our schools. “He was going to make a difference,” said Porter. “The positive attitude and always keeping people going is what I’m going to miss the most. If you had a down day, he was going to lift you up. It was just in his nature. He wasn’t going to let anything bad bring us down.”

Lincoln County Sheriff Steve Rushing said he’d received many texts and calls from people asking what they could do to pay their respects to Durr. So they parked the deputy’s patrol car at the back steps of the sheriff’s department near their offices and are allowing individuals to leave items there.

He said hundreds of people have visited the car.

“It’s covered in flowers, gifts, notes, cards,” he said. “There’s been a steady stream of people.”

He is overwhelmed at the support he’s seen directed at his department, Durr’s family and the families of all those slain over the weekend.

“It goes to show the type of community we have. When tragedy hits, people in this community step up,” he said. “The outpouring of support has been great.”

Rushing said law enforcement officers from other departments outside of Lincoln County will be covering his deputies shifts so they can attend Durr’s services.

The Brookhaven Police Department is encouraging individuals to remember Durr by displaying his badge numbers, 9 and 22. Durr worked for BPD for four years under Badge No. B-9. At Lincoln County, he was Badge No. 22.

The department is also asking for a moment of silence at 9:22 a.m. and 9:22 p.m. all this week in remembrance of Durr.