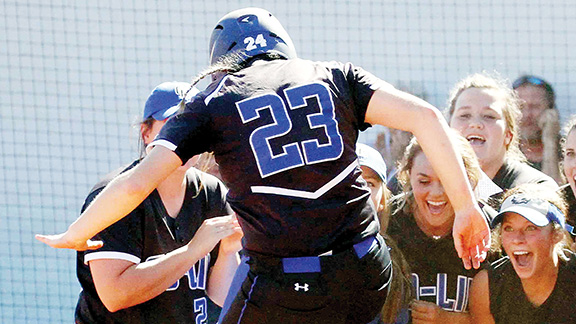 Bailey Root of Co-Lin (23) jumps to home plate surrounded by her teammates after a big home run during a game this season. Root and two other players earned post-season recognition this week. (Photo submitted)

Vanlandingham landed All-State recognition after standout season at the plate. The sophomore led the Lady Wolves with a .484 batting average, .522 on base percentage, and a .718 slugging percentage, which ranked 29th, 55th and 84th in the nation respectively. The Copiah Academy also led Co-Lin with 24 stolen bases, 35th in the nation. Vanlandingham finished the year with five homeruns and 27 RBIs.

Root, a Silsbee High School graduate, received All-State Honorable Mention after leading the Lady Wolves in the circle throughout the season. She went 9-8 on the year with one save in 25 appearances. Root racked up 85 strikeouts with a 2.92 ERA on the year, which ranked 66th and 82nd nationally.

On the biggest stage of the season, Loyd Star junior pitcher Cade Hodges shined brightest. In game one of the... read more