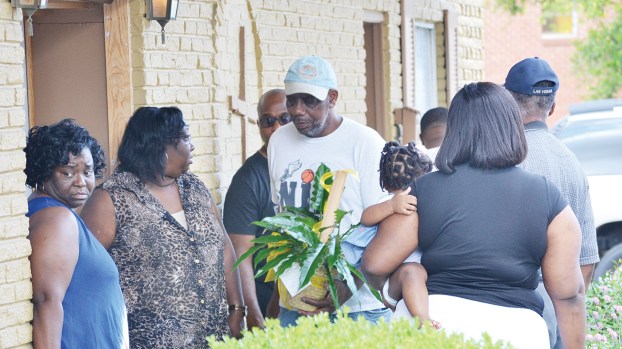 Photo by Donna Campbell/Mourners make their way inside Williams Mortuary Friday to pay respects to Austin Edwards, 11, and his 17-year-old cousin, Jordan Blackwell. The two were among eight people killed May 27 and 28 in a shooting spree allegedly committed by one man. Their funeral service is Saturday at 2 p.m. at Alexander Jr. High.

Ashley Washington clung to her mother’s side as they stood on the sidewalk in front of Williams Mortuary Friday, tears wetting the small girl’s cheeks.

Eleven-year-old Austin Edwards was her classmate and Ashley was about to tell him goodbye.

Edwards and his 17-year-old cousin Jordan Blackwell were fatally shot Sunday morning at a home on Coopertown Road.

They were among eight people killed over that weekend allegedly by the same suspect, Willie Cory Godbolt, who was arrested later that day.

The two boys are among seven in the same family who died in the shootings. The other, Lincoln County Deputy William Durr, was laid to rest Thursday.

The funeral service for the cousins will be Saturday at Alexander Jr. High beginning at 2 p.m.

A steady stream of friends and family of Edwards and Blackwell attended the visitation at the funeral home Friday. Funeral Director Pat Williams Tillman said hundreds were expected to make their way through the line to pay respects to the Brookhaven students. She expected hundreds more to visit with the family at the visitation held later at St. James MB Church.

At Williams, the boys were dressed in blue suits, in identical dark blue caskets, each covered in a spray of red and white roses.

Dozens of plants and colorful floral arrangements filled the end of the viewing room. Some bore the red and blue colors of the Brookhaven School District where the two were students. Blackwell, the son of Shon and Tiffany Blackwell, was a senior at Brookhaven High School. Edwards, the son of Clifton Gordon and Shayla Edwards, was in the sixth grade at Lipsey Middle School.

Mourners made their way past the caskets, some passing by quickly, others standing in silence beside each of the boys.

Young men who are usually strong and tough wiped away tears. Mothers in line hugged their children a little tighter than usual.

Jill Washington comforted her daughter before the two went inside. She said she’d talked to Ashley about her classmate’s passing.

“It’s tragic how they went, but something good always comes out of bad,” she said. “It’s drawing the community together on one accord.”

Voters will take to the polls Tuesday in Brookhaven to choose a mayor, several aldermen, an alderwoman-at-large and a police... read more