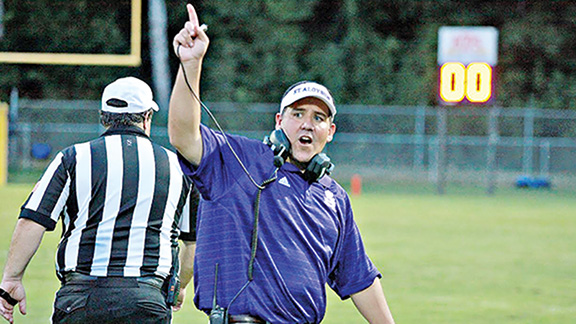 Smithhart looks for chemistry in summer

For any person stepping into a new job, there’s always an adjustment period.

Smithhart left St. Aloysius in Vicksburg and took the job in March, which was a move the coach planned out for a while.

He comes to Lincoln County with a padded resume, including two district titles and one state championship appearance for the Golden Flashes as the head coach.

The first step is simple for Smithhart when it comes to the summer workouts, which is to build team chemistry through participation.

“There’s a lot of new stuff we’re throwing at them and a lot of learning,” Smithhart said. “We need to get used to each other and build a good start heading into the fall. Most of it will consist of hard work and running.”

Smithhart takes over a West Lincoln team that went 2-8 in 2016 with their only two wins coming against Enterprise and Bogue Chitto.

The good news for West Lincoln is the 13 seniors that return to the team for their last season for the Bears. Smithhart is looking forward to working with Chase Owen, Gabe Nations, Brandon Smith and the rest of the seniors. Owen didn’t get to go through spring practices with a shoulder injury, but the coach is looking forward to developing chemistry with Owen and the rest of the team.

“I look forward to see what Chase can do along with the rest of the seniors,” Smithhart said. “They will have to be the leaders of this team come the fall and they’ll be doing the brunt of the work on Friday nights.”

Helmets and pads can’t be used during summer workouts, but there’s still plenty of opportunities to teach the players without the physical aspect of the game of football.

Conditioning, getting comfortable with the team and going over fundamentals are the focus of summer for the new head coach. The players will be tested and the trials and tribulations of summer workouts will push the players, but the goal to improve will be met by the time it’s over.

“The main thing is to treat all the players fairly, have a good time and to get a lot accomplished,” Smithhart said. “It’s a lot of hard work, but it can be fun too. I have to be there for the players and to be steady. The more I’m around the players, the more positive things will come.”

With a new regime entering West Lincoln, expectations will be raised with the resume and pedigree that Smithhart brings. The Bears didn’t make the playoffs last year and have only made it once in the school’s history.

Rebuilding is a process, but one that the head coach is looking forward to and it all starts with summer workouts Monday morning.

“The rebuilding process is going to be a lot of fun,” Smithhart said. “We have to beat some pretty good teams this season. We want to be our best in November and not in August. Getting better is the main goal. Consistency is the key.”

Offers and visits started to pick up fast for Brookhaven rising senior defensive back Jemaurian Jones before the 2016 football... read more