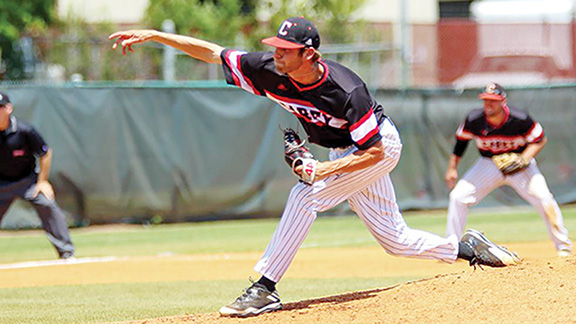 After an amazing run all the way to the NAIA World Series in Idaho, Loyd Star alum Braden Smith and the William Carey Crusaders have come home.

The Cinderella story came to an end Wednesday as the ninth-seeded Crusaders fell to Lewis-Clark State by a score of 12-7 and ended the five-game run for William Carey. The Crusaders came one win short of reaching the NAIA World Series final.

Former Hornet Braden Smith got the win on the mound in game three against the University of Arts and Sciences in a relief appearance.

Sophomore Devin Smith got the start and pitched only 1.2 innings, giving up five earned runs on four hits, two walks and one strikeout.

Braden Smith filled in for Devin Smith and pitched 7.2 innings of scoreless baseball in relief and single-handedly kept William Carey in the game. He gave up no runs on four hits, no walks and four strikeouts. The Loyd Star alum was efficient on the mound by throwing only 92 pitches in his best outing of the season.

William Carey followed up the next day with a dominating win over Missouri Baptist by a score of 12-3 to advance to the semifinal round of the NAIA World Series.

William Carey came out on fire against Lewis-Clark State, putting up five runs in the top of the first to take command. With the Crusaders holding a 6-5 lead in the bottom of the sixth, Lewis-Clark scored six runs in the inning to take the lead for good and ended up winning the game and knocked William Carey out by a final score of 12-7.

The Crusaders ended the season with a 45-20 overall record in the 2017 campaign.

Smith ends the season with a 7-3 overall record on the mound with a 3.95 ERA in 13 games started for the team. In 73 innings pitched, Smith totaled 53 strikeouts, 41 walks and 32 earned runs.

Smith’s role on the team will increase when his junior year rolls around in Hattiesburg. Smith will be looked on to lead the rotation in 2018 and hopefully another trip to the NAIA World Series but with a different result in the end.