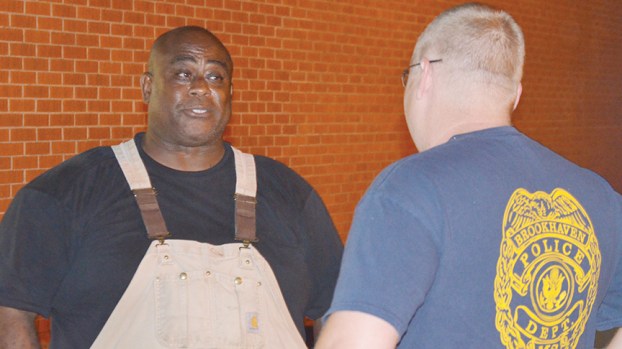 Photo by Matt Rushing/Kenneth Collins talks to one of his supporters after he was elected Brookhaven’s police chief Tuesday.

Brookhaven  Police Lt. Kenneth Collins, wearing overalls and a big smile, hugged and hand-shaked his way through the supporters who gathered with him Tuesday night as he learned he would be the city’s police chief.

He thanked God and the voters for the win.

Collins, a Democrat, received 1,942 votes to Republican candidate Jason Gaskin’s 1,375 — or 59 percent — in unofficial results which included affidavit and absentee votes. Of 7,514 registered voters, 3,340 voted in the general election. Slightly more than 300 of those were cast absentee.

He said he wants to bridge the gap between law enforcement and the community, building bonds and working with other agencies “to bring criminals to justice.”

Gaskin sent congratulations to Collins to The Daily Leader through a text message after the results were tallied.

“I want to congratulate Mr. Collins on a well run race. I will support him in every way as he transitions into the office of police chief. And I want to thank the voters who supported me and to ask them to support Mr. Collins in his new position. Most especially I want to thank my wife and my family who stood by me during this long campaign and my supporters who worked so hard on my behalf,” he said.

Prior to the primary election, he said there is a need for more officers on the streets to cover the annexed areas.

“We should arrange meetings in those areas with residents and appoint leaders and start a neighborhood watch,” he said. “Assign officers to work areas each day — their job is to get to know the residents in the community and find out their concerns and issues they have. Our department needs to build better relationships with the people we serve. By having an office familiar with the issues we can report directly to the department and we’ll be able to stay on top of things before they get out of hand.”

Collins said the top issues in the city are the protection of children, crime prevention and the community.

“We need to get into the schools and work with the school board, resource officers and parents to reach our children before they get into trouble,” he said. “We should interact with our kids on a daily basis and not only when they are in trouble or when we need information from them.

“By interacting with them we’re steadily building trust and respect with them and when you need their help they’re more willing to give it.”

Collins has 30 years in law enforcement, which includes three years with Lincoln County Sheriff Office, 27 years with BPD and over eight years with the National Guard.

3 women elected to Brookhaven city board of aldermen

Voters Tuesday made their choices known for Ward 3 and 6 and alderwoman-at-large. Incumbents Mary H. Wilson and Karen Sullivan... read more