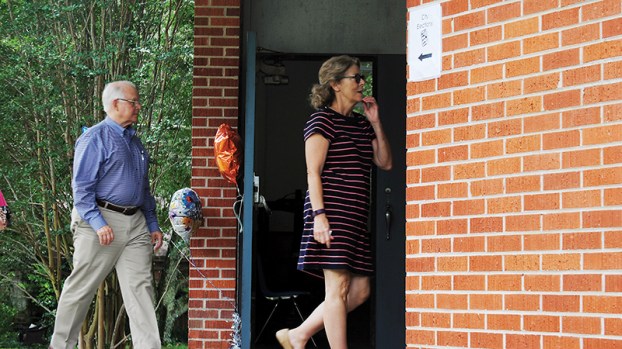 Photo by Matt Rushing/Voters make their way into the polls at Brookhaven Elementary to cast their ballots in the municipal general elections today.

Polls in Brookhaven will remain open until 7 p.m. and results of the municipal general election will be announced in the upstairs courtroom of the Lincoln County Government Complex and at www.dailyleader.com.

Voters may cast ballots for Democrat, Republican and independent candidates in the general election, regardless of how they voted in the primary election, said Lincoln County Circuit Clerk Dustin Bairfield.

He said voting was slow early today because of the rain, but it appears to be picking up. He is hoping for a similar turnout as the primary election May 2, which was 3,250 votes cast.

Bairfield said 332 absentee ballots have been collected for the general election, which is up from 260 absentee votes in the primary.

Lincoln County is accepting donations to help cover the cost of insurance premiums for the family of slain sheriff’s deputy... read more