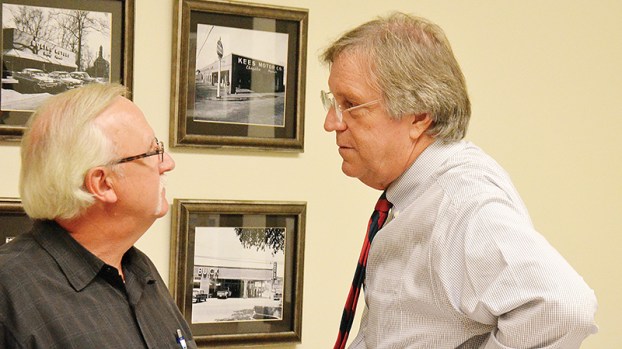 His first four years flew by, and Joe Cox is looking forward to leading the city for another term.

He soundly defeated Republican John Roberts Jr. in the primaries and then Democrat David “SWAC” Smith in the general election Tuesday night.

Instead of taking Wednesday off to rest from grueling hours spent on the campaign trail, Cox, 62, was back in his office at City Hall, keeping the ball rolling on the things he wants to accomplish in the next four years.

“I want to continue what we’ve started,” he said.

One of those projects is providing city-wide water and sewer services to annexed areas.

“We’re getting it started and moving dirt on it,” he said. “We’ve been tied up with easements. We’ve had a couple of those outstanding for the last few months.”

The mayor said Brookhaven is responsible for providing municipal services to the annexed areas, but the board is governed by existing economic conditions, economic feasibility and financial resources. He said the city must make prudent use of municipal funds to accomplish the goals, and he feels the city has been working in good faith to deliver services.

Now it’s into Phase Two which is the extension of municipal water and sewer services to various areas of annexation.

The project was funded in 2016 by municipal bonds and will be completed within the 2019 deadline.

Another continuing project is road paving.

The city just completed a massive paving project that improved the rides on more than 70 of the worst-rated streets in Brookhaven. Dungan Engineering was the engineer on the project.

Another project after that changed the traffic flow downtown to one-way streets on Railroad and Whitworth avenues.

They’ll likely use the study that Dungan Engineering completed for the city. The firm analyzed the streets and rated them based on four conditions: failed, poor, fair and good.

Some ward lines overlap streets. Cox said last year the engineering firm estimated a cost of $1.4 million per year to maintain Brookhaven streets. However, he said, budget constraints do not allow the city to budget all of that amount in one year.

Each year, poor and failed streets will be evaluated for repair.

Another improvement for the city Cox would like to spearhead is a covered walkway that would stretch the three blocks from the Godbold Transportation Center to the downtown area. The train station is served by Amtrak’s City of New Orleans passenger train.

Cox said merchants and restaurateurs have told him they missed the days of the train station being in the heart of downtown because whenever there was a short layover, passengers would come in and shop and eat.

The three blocks is a bit too far for anyone to depart and visit, he said, especially in rainy weather.

Cox is ready for the swearing-in ceremony June 29 and the first meeting of the new board July 5, after the Independence Day holiday.

“I look forward to the new board,” he said. “We’ve got some familiar faces and some new faces.”

Hymns and popular musicals will be the focus of the Lincoln County Chorale’s spring program. The performance, entitled “From Rutter... read more