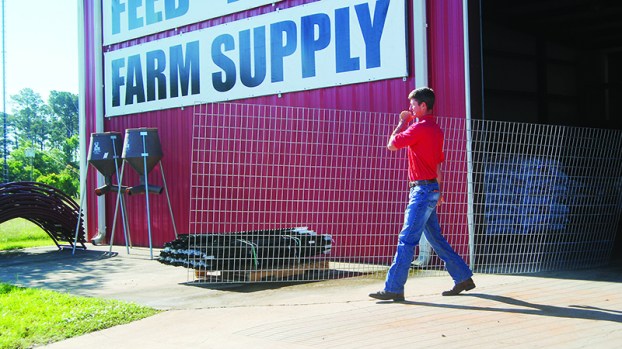 Brothers do more than build fences; expanded and renamed business to include farm supply

In May of 1999, Lande Johnson was about to graduate college. He was deciding between medical or veterinarian school.

“After some time I didn’t feel like the Lord was calling me to either school,” Johnson said.

He had been building fences during school breaks to help pay for college and turned that part-time job into a full-time business.

“I figured I would just continue to build fences until I figured out what I wanted to do the rest of my life,” Johnson said. “Next thing I know, we got into the fencing business for ourselves and eventually branched out into the commercial fence business.”

Lande and Jordan started the business in May of 2000 and opened their current building located on Caleb Drive in Brookhaven in 2010.

“We ended up doing a lot of work for AT&T when the cell tower boom was going on,” Johnson said. “We also built fences for different oil companies throughout the region.”

A few years later, the fencing business started slowing down. The oil field industry was hurting. The cell tower business was falling off as well.

“My brother and I could tell the fencing business was slowing down and we would meet in his office every day to pray and ask the Lord for direction on what to do,” said Lande. “We slowly phased over to the farm and ranch side of things. We still sell fencing supplies but we don’t install it.”

A change in the business model also brought change to the company’s name. The company’s name had been Johnson’s Fence until the beginning of 2017 when they changed the name to Providence Hills Farm & Ranch Supply. Their current business model is selling farm, ranch and fence supplies. With the change, it has given the brothers a chance to extend their expertise on different topics to their customers.

“I have 27 years of dealing with cattle,” Lande said. “I love it, I study it and know genetics. Jordan and I help people buy bulls that are intimidated by the genetic side of it. We do  artificial insemination work in cattle. We also do some embryo work. We also bring people together and help them sell their bull. I love to be able to put my knowledge of the ranchers I know in Kansas, Montana and Georgia to bring the best genetics in our area.”

While the Jordan brothers are busy with farm supplies, another member of the family is busy with fashion.

Attached to the Caleb Drive business is Erin & Co. The store offers a variety of clothing, jewelry and gifts.

“I opened Erin & Co. in October 2015,” said Erin Johnson. “I kind of wanted it to be a gift shop but people tended to buy the clothes more often.”

“There are some days when the entire family is up here eating lunch and working together,” Erin said. “I wanted to create a place where people could come and be inspired.”

Inspiration is a word that sticks with the Johnson family.

“I want everyone that walks in these doors to feel like that there’s something different about these people. That they loved me and they cared about me,” said Lande.

A pair of auctioneers plan to breathe new life into the old thermometer plant. Bo and Jo Coward of McCall... read more