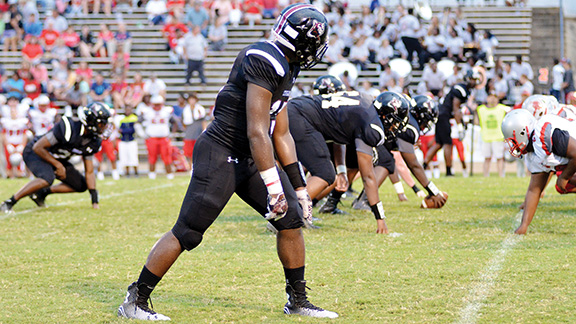 The Lawrence County Cougars line up at the line of scrimmage in a game played last season. With only six seniors on the 2017 football roster, head coach Jaymie Palmer has a lot of work to do to get the Cougars ready for the upcoming season. (File photo)

That’s what Lawrence County head football coach Jaymie Palmer preaches to his players during summer workouts. Play and be focused for 48 minutes of the football game and be mentally ready for a full-game battle.

Each football game is 48 minutes long and the Lawrence County Cougars are preparing for 48 minutes of battle in the fall with conditioning and strength training in the heat of summer.

“Last year, we couldn’t focus for the full 48 minutes of the football game. We would have one good quarter and then one bad quarter,” Palmer said. “We want the players to focus on every play and every rep for 48 minutes. We want them to be focused physically and psychologically.”

Each station during summer workouts goes on for 48 minutes, the length of a football game. Palmer wants to send a message to his players to give it their all for the full time and never let up.

After a fantastic 2015 season where Lawrence County went 13-2 and advanced all the way to the 4A South State title game, the Cougars stumbled in 2016 with a 4-8 overall record.

Injuries bit the team hard, losing starting running back Quitten Brown for half the season and starting quarterback Charl’tez Nunnery for a couple of games.

One session of summer workouts is devoted to weightlifting and the other session is for conditioning drills. For the month of June, workouts happen Tuesday, Wednesday and Thursday and during the month of July, they’ll move to four days a week starting on Mondays.

The main focus for coach Palmer is to see improvement and consistency from his team.

“Consistency is the key,” Palmer said. “We have to cut down on turnovers because that really killed us last season. We also have to be more physical at the line of scrimmage.”

It’ll be a brand new challenge for Palmer and the Cougars this season in replacing many senior leaders from the 2016 football team.

On offense, Lawrence County will replace its starting quarterback, running back, tight end, and one of their wide receivers. On defense, the Cougars will have to replace six seniors.

Palmer is ready for the challenge and is excited to see what his younger players have to offer.

“We got five returning touchdowns from last year to this year,” Palmer said. “We got some good young players that had good springs. We’re very talented. We just have to see what they can do when the lights come on.”

Palmer said the roster has 61 players on it so far in the summer, but only six of them are seniors. On a team with 55 underclassmen and six seniors, Palmer is confident in his seniors and is confident in their talent.

Rising junior Jerome Dudley will replace Charl’tez Nunnery at quarterback. Palmer saw a lot of potential from Dudley in the spring game and played well in the game for the Cougars. Rising sophomore Antwan Pittman will be the starting tailback, replacing former Daily Leader All-Area MVP Quitten Brown.

Palmer is most excited about the wide receiver position, where each starter is 6-foot-3 and above. Leading the receiver core will be rising senior Kendarious Feazell and rising junior Ikeem Showers.

No pads can be put on over the summer, but Palmer and the Lawrence County Cougars are mentally preparing for many 48-minute battles to come during the 2017 season.

The Cougars are a very young football team and they lost many key players from last year’s team, but they’re ready for the challenge.

“We have to get the players to play for each other and not play for themselves. We’ll be better at that,” Palmer said. “The summer will push these guys and they’ll become better football players from it.”

In a year filled with great baseball in Lincoln County, several players from the area made the baseball State Games... read more