Donald and Susan Inouye of Mililani, Hawaii, announced the engagement and approaching marriage of their daughter, Robyn Inouye of Honolulu, to Jonathan Wayne White Jr., of Honolulu.

He is the son of Wayne and Beverly White of Brookhaven.

Miss Inouye is a 1998 graduate of Mililani High School and a 2010 graduate of the University of Hawaii, Manoa, with a bachelor’s degree in art history. She is employed with the State of Hawaii Judiciary.

The prospective groom is the grandson of Edna Miller of Brookhaven, the late M. B. Miller, and the late J.R. and Sidney White.

The couple will exchange vows on Saturday, July 1, 2017, at 6 p.m. at the Waikiki Aquarium, Honolulu, Hawaii. 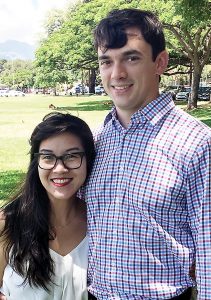 Thomas and Annie Winborne from Brookhaven are celebrating their 70th wedding anniversary. The Winbornes were married by the justice of... read more