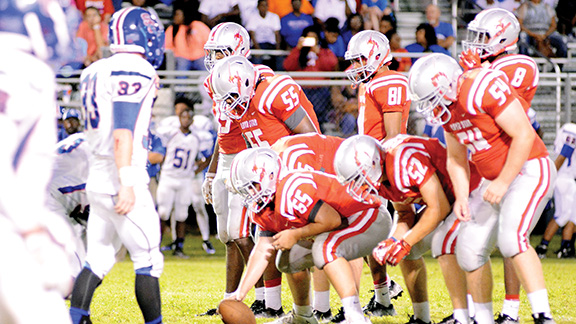 The Loyd Star Hornets offensive line moves up to the football during a game played last season. New head coach Brian Ford, who takes over a young Loyd Star team in 2017, wants his players physically ready when the school year rolls around. (File photo)

As a new head coach in the area, there are many obstacles Loyd Star head football coach Brian Ford has to overcome to turn the program around.

Many players exited from the 2016 football team that went 4-8 overall and finding new players to come and produce was the first challenge for Ford.

So far, 35 players have shown up for the summer training program and Ford expects to have 40 players on the opening roster when football season starts.

So far, so good for the new coach on the block.

“We got the kids we expected to have show up,” Ford said. “There was a few more we thought would show up. We’re excited about the kids that we have so far.”

Being the new guy in Lincoln County, developing chemistry with the players and the coaching staff was one of the main goals for Ford when he arrived at Loyd Star, something the coach called crucial.

“It’s important to start building relationships with each player and each coach,” Ford said. “It’s been a smooth transition so far. I feel like the kids and coaches have accepted me and it’s really been smooth so far.”

The summer program for Loyd Star focuses on making the players bigger, faster and stronger. It is split into two parts, with conditioning to start the day then transitioning to weightlifting to end the day.

“We base our workouts on percentages,” Ford said. “We want to increase weight and their percentages as the year goes on. It’s all about getting their muscles, heart and lungs ready for the football season.”

Another big hurdle for the Hornets program is replacing the 11 seniors from last year’s team. One of those players is starting quarterback and linebacker Parker Flowers. Flowers was the senior captain on the team and the vocal leader on both sides of the football.

“Keene has taken most of the reps at quarterback so far,” Ford said. “He’s a level-headed kid that can really step up and play for us.”

Flowers had 139 tackles last year for Loyd Star and replacing that production is a challenge the team is looking forward to.

“Parker is a kid you would love to have back,” Ford said. “Bradyn Ezell  will be the guy to replace him and he’s going to be a tackling machine for us.”

On the offensive side of the football, Loyd Star loses their second leading rusher from last year in Zac Arnold. Replacing Arnold at running back will be rising senior Patrick Price, who rushed for 337 yards and four touchdowns in 2016.

“We’re going to lean on Patrick (Price) a good bit this season,” Ford said. “Price is going to be our workhorse on offense and I’m excited about his potential.”

Where Ford is most excited about his team is up front with the offensive and defensive line. Ford said being strong up front on the line of scrimmage is what makes the difference in football games and he returns an experienced offensive line in his first season for the Hornets.

“Our offensive line is mostly juniors that have playing experience. That’s definitely our strength on offense,” Ford said. “I try and look at what our strengths are, build on that and try and fill in our positions of weakness.”

Ford has a lot of hurdles to leap in order to get Loyd Star football back on track, but the summer provides a fresh look at the future of the program.

“There are several guys that can step up for us and lead us into the season,” Ford said. “We’ve had a good turnout so far this summer and that can lead to great things.”