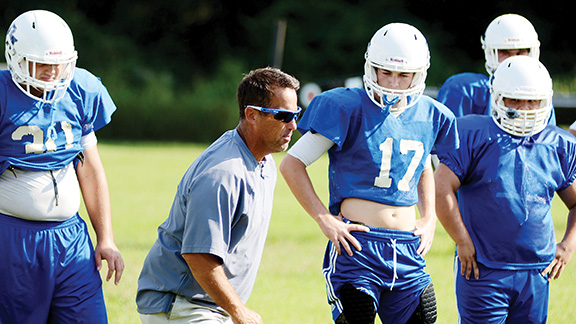 Brookhaven Academy head coach Ron Rushing coaches his players during a fall practice last season. With a bigger roster and new confidence, the Cougars are poised for a turnaround in 2017. (File photo)

With only 17 players on the 2016 roster, the process of a turnaround for Brookhaven Academy was tough for first year head football coach Ron Rushing.

Injuries and some bad breaks shortened the 2016 season for the Cougars and the team had to forfeit their final two games of the season against Simpson and Copiah Academies.

With not enough players to compete the rest of the season, the Cougars stopped their season short and shifted their focus to 2017.

The goal was to recruit more players and bring more players to the football program. Rushing and Brookhaven Academy did just that with a good turnout so far this summer.

With 36 players already on the roster, Rushing and Brookhaven Academy are ready for a turnaround in the 2017 season.

“We’ve made a complete 180 when it comes to attendance and participation,” Rushing said. “We’re really excited about where we’re at right now and everybody is excited about the season. It’s a totally different atmosphere.”

Heading into their matchup against Amite County Christian School, Rushing only had 11 players available and due to an injury to one of those players, the Cougars forfeited the rest of the season.

Brookhaven Academy finished the 2016 season at 0-8 overall, but the fight they showed playing with an undermanned roster helped the recruiting process with the football program.

“Our kids fought all last year and we’ve really built a foundation for my tenure here,” Rushing said. “We talk about it in school with the kids about buying into the program and the encouragement we got from them really helped us get to this point. It’s really exciting.”

The summer program for Brookhaven Academy consists of weightlifting and conditioning training every week on Monday, Tuesday and Thursday. Unlike most of the schools in the area, the Cougars practice in the afternoons, allowing the players to enjoy the summer while at the same time focusing on football.

“The players and coaches both have to enjoy their summers,” Rushing said with a laugh. “Practicing in the afternoon is always something I have done and it’s been good.”

One recruiting tactic Rushing has done is trying to bring in players from other sports to come and play football. Rushing helped recruit Tate Felder, Dawson Flowers, Luke Jackson and Ethan Nations form the basketball team to come strap the pads on. Rushing also recruited Levi Smith from the baseball team to play.

“We’re looking forward to those guys from other sports playing football for us,” Rushing said. “Some of these guys can really be vocal leaders for us and they’re really athletic.”

Rushing said he’s looking to offensive linemen Dylan Burt and Ben Powe to lead the team into the season to give advice to the newer and younger players.

It will be a tall task to turn around the Cougar program in 2017 season with all the struggles from last season.

Rushing and his coaching staff are excited for the challenge and the turnout of players over the summer is one of the many signs of encouragement.

“We would like to be in the playoffs and extend our season this year,” Rushing said. “Regardless of how last season went, we still have the same expectations. We’ve got a lot of good athletes back. As far as athletic ability, we’ll be good at that. We’re excited.”

The lawyer representing Rebel Rags in a defamation lawsuit related to the NCAA’s investigation into the Ole Miss football program is... read more