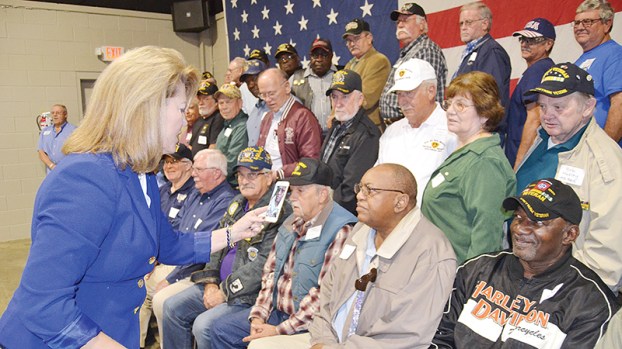 Photo by Donna Campbell/Sen. Sally Doty, R-Brookhaven, records the names of Vietnam veterans who attended the Veterans Day Celebration at Lincoln Civic Center in November. Combat veterans will be honored at a dinner June 27.

A dinner to honor combat veterans from Lincoln County who served in the Vietnam War will be June 22 in commemoration of the 50th anniversary of the war.

The free dinner will be hosted by the Capt. Danny D. Entrican Post 2618 of the Veterans of Foreign Wars. All combat veterans who served in the combat theater of operations during the Vietnam War and their families are invited to attend the commemorative dinner recognizing their service and their families’ sacrifices during that conflict, said Post Commander Ken Powell.

“We want to honor those who had boots on the ground in the combat of operations,” Powell said. “They’re the ones who came home and suffered most of the indiscretions. They didn’t get the public recognition that they deserved. This is an opportunity to honor and recognize them and their families.”

The dinner will be held at the VFW Post 2618 at 728 Industrial Blvd. The event begins at 5:30 p.m. with dinner served at 6 p.m. Guest speaker is Norm Copeland, incoming commander of the Mississippi Department of the Veterans of Foreign Wars.

Veterans are asked to bring a copy of their DD Form 214 to the dinner to verify years of combat service during the Vietnam War, Powell said.

Presentations will be made to each of the attendees and their families.

Brookhaven’s city clerk is headed back to the beach. Mike Jinks will retire at the end of this month, and... read more