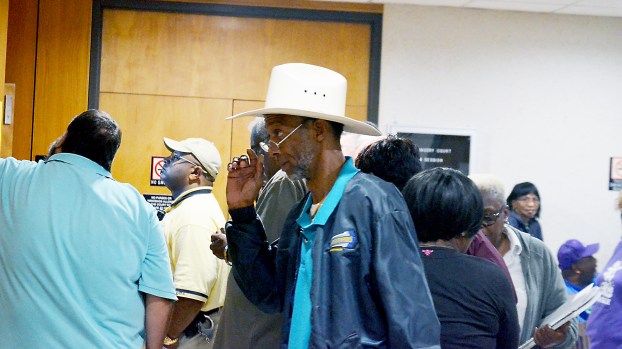 Photo by Matt Rushing/David “SWAC” Smith looks at electronic election totals June 6 at the Lincoln County Government Complex where the ballots from each ward were tabulated. Smith is one of three Democratic candidates who were unsuccessful in their bids for municipal seats.

Three Democratic candidates who made unsuccessful bids for municipal seats made requests to inspect the ballot boxes that were used in the June 6 general election.

David D. “Swac” Smith, David McCoy and Marilyn Dow-Harris each presented letters to Lincoln County Circuit Clerk Dustin Bairfield this week asking to examine the boxes from the six wards. Bairfield will unseal the boxes this morning in the county courtroom.

McCoy and Dow-Harris each submitted a letter to Bairfield’s office Tuesday, while Smith turned in his letter Wednesday.

Though it was a municipal election, the city uses the county’s electronic voting machines. Bairfield oversees the municipal election with help from the city clerk’s office. The county trains the poll workers and supplies the machines, he said.

Bairfield does not know why the three are asking to inspect the boxes.

“It’s a ballot box examination. The supplies, the absentee envelopes, the tape receipt from the machine,” he said.

The sign-in book is also included in the supplies.

After this election’s boxes are inspected, they will be resealed and stored for two years, he said.

Bairfield suspects they want to see what the poll workers did at the polling places.

A ballot box examination can be done within 12 days of certification of the election. Brookhaven’s election was certified that night, he said.

Bairfield said he does not expect them to find anything that could cause them to question election results. He said representatives from the Department of Justice were also at the courthouse during the proceedings.

As the boxes from the wards came in to the courthouse June 6, Bairfield accumulated the votes. Deputy City Clerk Samantha Melancon and her staff took care of overseeing absentee voting and ran the polling places.

“It was a fairly smooth election,” he said.

Smith’s and Dow-Harris’ challengers, incumbent Mayor Joe Cox for Smith and incumbent Alderwoman-at-Large Karen Sullivan for Dow-Harris, both won by large margins. Cox led Smith by 580 votes, while Sullivan had 144 votes over her opponent to win.

Newcomer Shelley Harrigill, an independent candidate, defeated McCoy by just seven votes. Before the election, Bairfield received a decision from Secretary of State Delbert Hosemann that whoever received the most votes would win, regardless if someone didn’t have 50 percent plus one. There would be no run-off election, he said.

McCoy said he decided he wanted to look at the boxes. “I just want to make sure that everything was fair and done right,” he said.

Dow-Harris said she planned to meet with her campaign team before inspecting the boxes this morning.

“We’re going to determine what we’re looking for,” she said.

Dow-Harris did not want to say exactly what she expected to find.

“Let’s just say there’s no comment at this time,” she said.

Bairfield said all candidates for the municipal election were invited to attend poll worker training.

“So they can see all the checks and balances are in place,” he said.

He said none of the three attended that training.

Bairfield said candidates are also told that they or their representative can go to the polling places at 7 p.m. and get the totals from the receipt tapes that hare hanging on the wall.

“If they’re going to challenge absentees, by state law, that has to be done at the polling place,” he said. “Once they (the boxes) are open, you’re not able to challenge. That’s what we tell them.”

On election night, candidates can also ask for verification of the results at the courthouse, he said.

The only complaints Bairfield heard on Election Day were signs too close to a polling place or people campaigning too close. Both must be at least 150 feet away from the entrance. Only a few of those calls came in June 6 and someone was dispatched to have the sign and the candidates’ representatives moved further from the entrance, he said.

He’s only seen someone ask to inspect ballot boxes one time in his five years as circuit clerk. That was when State Sen. Chris McDaniel challenged the results of a runoff election in 2014, in which 41-year incumbent Sen. Thad Cochran won by about 6,400 votes. 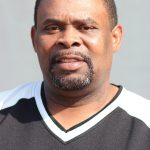 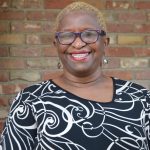 New Orleans style, taste are on the boulevard

Authentic cajun po’ boys at a tobacco store? Why not. Brookhaven Discount Cigarettes has been serving up New Orlean’s style... read more