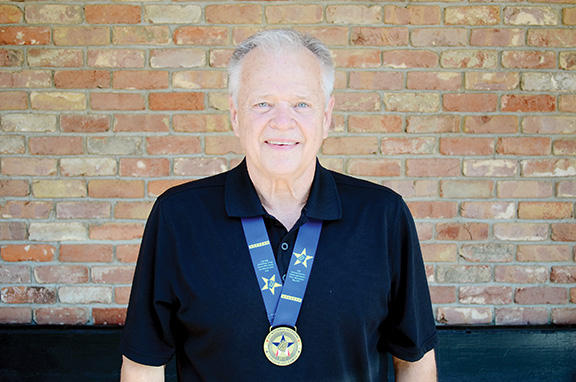 D.C. Greer of Brookhaven poses for a picture with his gold medal won in the 2017 National Veterans Games 400-meter race around his neck. (Photo by Dylan Rubino)

D.C. Greer running for a purpose

D.C. Greer is a decorated man.

The U.S. Army veteran and Brookhaven resident of 20 years has competed in the Louisiana and Mississippi Olympic Games since his early 50s, earning 12 gold and silver medals in the 200 and 400-meter sprints over the last 15 years.

Now at age 70, it’s hard to accomplish more at his age than what Greer has already won, but the drive to win and to continue fighting for veterans awareness keeps his drive alive.

“One thing I have a passion for is to contribute to the veterans association to help the national games,” Greer said. “Winning keeps me going and at the same time, I want to tell my story and also the veterans story. That means a lot to me.”

Growing up in the Jackson area and in Morgan City, Louisiana, Greer was always a good athlete, but never really was invested in playing sports in high school.

In January 1968, Greer enlisted in the United States Army and served until August 1970 and served in Korea for 13 months.

At the age of 55, Greer was diagnosed as a diabetic, struggled to stay in shape and started to gain weight.

“I really needed to exercise and lose weight,” Greer said. “I started looking at things I could be engaged in and I found the Senior Olympics.”

His drive to stay in shape got him to train for distance running. Greer began competing in the National Veterans Games by representing the Jackson Veterans Administration in Omaha, Nebraska. Greer won the silver medal in the 200 and 400-meter races and his love for competing took off.

“I’ve been blessed with good health, even as a diabetic,” Greer said. “Can’t be a fat boy and compete like that.”

The blessing of good health took a turn for the worse in February of 2016. Greer was diagnosed with blood clots in his lungs and legs.

Between the months of March and June, there was no was physical activity for Greer, except for living his day-to-day life.

“It was miserable,” Greer said. “I wanted to be out there and active so bad. When you’re really active and you shut your life down, it really makes you miserable.”

Greer gave credit to his wife, Maria, for giving him the strength to fight and not think about giving up.

“She was so supportive,” Greer said. “In the time where I was recovering, she was my prayer warrior. I couldn’t have made it without her.”

In July of 2016, Greer received another blessing as a CT scan showed no clots remaining that would be detrimental to his health.

Greer was back in action.

For the rest of 2016, his health began to progress, allowing him to increase his training program and soon got back in top shape.

“The blood clots weren’t really the issue with coming back. It was gaining my stamina back in my training,” Greer said.

His hard work and perseverance got him back to his goal with competing in the 2017 National Veterans Games held in Biloxi back in May.

“That was my favorite win by far,” Greer said.

It wasn’t just about winning the gold medal and making a comeback in Biloxi. Being around the veterans and heroes and listening to their stories made it all worth it for him.

“You can’t believe the stories that these guys have,” Greer said. “They all have a story to tell. Even if I didn’t compete, I would just go down there to meet those guys.”

Standing up for what the Veterans Games means to him and creating awareness through education is what Greer strives to do in the future.

“Being in the presence of those heroes makes it all worth it,” Greer said.

The goal now for Greer is to help fund and support opportunities for the 2018 games in Albuquerque, New Mexico.

Through all the challenges in his life, the fight to spread awareness about a good cause is what keeps his motor running.

“The degree of the challenges in our life reveals the degree of restoration only God can provide.”

Parker Flowers and Konner Allen have known each other since the fifth grade. The two baseball stars were close friends... read more