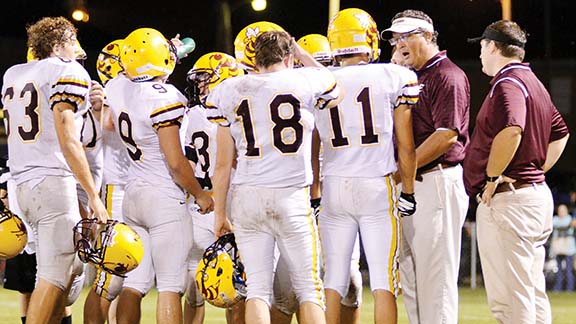 Enterprise head coach Brooks Burns talks to his team during a timeout in their win over Bogue Chitto last season. (File photo)

The Enterprise Yellow Jackets started off the 2016 campaign at 2-0, including a win over Lincoln County rival Bogue Chitto.

After that 2-0 start, the Yellow Jackets lost seven of their last eight games to fall short of a playoff birth. Enterprise also went winless in district play at 0-4, including losses to Loyd Star and West Lincoln.

The talent was there on both sides of the ball for Enterprise. The offense was led by a strong ground game, featuring quarterback Zach Hodges and running back Marvin Butler.

Both Hodges and Butler are seniors and will have to be replaced, but Enterprise is loaded at the running back position with rising seniors Tanner Waldrop and Darren Richardson returning for one more season.

The defense will have to replace four of their leading tacklers in Drake Allen, Austin Boyte, Devin Kirtfield and Tristan Cantrell.

Even with the group of seniors moving on from the Enterprise program, the Yellow Jackets have plenty of youth on their side to have a successful 2017 season.

The Jackets scored 177 points on offense and gave up 308 point on defense for the season.

Head coach Brooks Burns has a lot of work to do in replacing those seniors, but the younger players on the roster are talented enough to fill in and replicate the production.

In an offense focused around the ground game, Hodges led the team with 607 rushing yards and seven touchdowns. Butler led the Jackets in 2016 with 86 carries and had 319 yards and two touchdowns as a result.

Enterprise will lose 202 total tackles between the four senior leaders from last year’s team in 2017. Even with the big loss, the defense returns rising sophomore Tailor Young and rising sophomore Travis Huber to lead a young, but talented defensive line.

Young was impressive as a freshman for the Yellow Jackets with 53 total tackles and a team high five sacks on the season. Huber had 36 total tackles for the 2016 season and averaged five tackles per game.

Waldrop and Richardson will also make a big impact on the defensive side along with offense. The two rising seniors combined for 71 total tackles in the 2016 season.

Rising seniors Danny Thomas, Gabe Haggard and Trestin Grenn will be three other players to look out for as well with Enterprise.

There’s plenty of motivation for the younger players to come in with a different attitude after losing their final seven games to end last season. Players like Waldrop, Richardson and Young will be ready for the challenge to replace the senior leaders and produce at a high level.

Even with replacing the quarterback position, Enterprise has the returning players necessary to have a successful 2017 season.