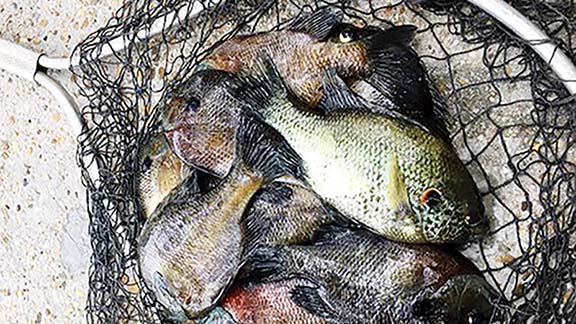 Bream fishing has slowed somewhat, however, one angler caught over 20 every morning last week. Another caught 19 on Sunday on crickets, while another angler did well with a fly rod. Try redworms fished on the bottom for Redear Sunfish.

Catfishing is good. Mary Crawford has some nice cats in it. Two big fish were caught over the weekend on ham. Try cutbait, worms or commercial catfish bait on the bottom.

No current reports on bream fishing. It’s usually beat around a full moon. Crickets and worms are the best baits.

Crappie fishing is reportedly very slow. Anglers are having a tough time catching fish. Try trolling or spider rigging in 8 to 12 feet of water. Minnows and jigs are both working well.

No current reports on bass fishing. Try topwater lures, soft plastics and spinnerbaits in shallow water in the grass and also around the willow trees.

No current reports on bream fishing, but it typically picks up considerably a couple of days before and after a full moon. Try fishing in about four feet of water around the banks. Redworms and crickets are working the best.

No current reports on crappie fishing.

There are no reports on catfish.

Bogue Chitto ready for change in 2017

There’s nowhere to go but up for Bogue Chitto football for the 2017 season. The Bobcats went 0-11 last season... read more