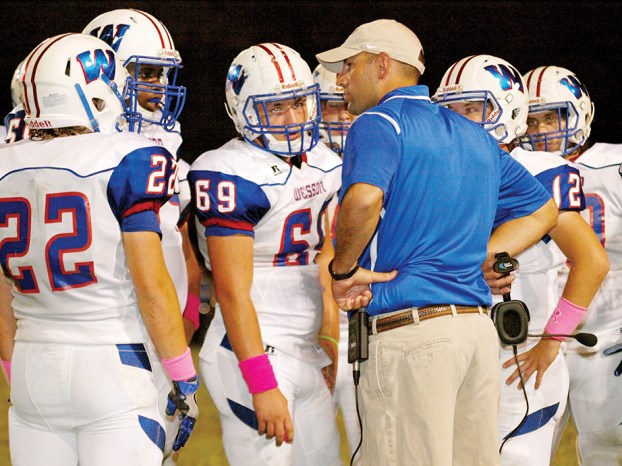 Wesson head football coach Jeremy Loy talks to his team during a timeout in a game played last season. (Photo by Tracy Fischer)

Wesson looking to finish strong in 2017

The 2016 season looked promising for the Wesson Cobras as the team got off to a 4-2 start, including a win over Bogue Chitto and an overtime win on the road against Raymond.

After the successful start, the Cobras stumbled down the stretch and lost their last five games of the season. In those last five games, the defense gave up a total of 268 points to the opposing offenses.

The difficult end to the season all came against district opponents and the Cobras went winless in district play for the 2016 season.

The focal point of the offseason workouts for the Wesson Cobras is to finish strong and get mentally ready for a long season ahead of them.

“We just couldn’t hold on late in games to win them,” Wesson head coach Jeremy Loy said. “We’re really focusing on stopping the big plays and making sure we know where to be on defense this summer.”

Loy took some of the responsibility for how the 2016 season ended and wants his team to be mentally ready for late game situations.

“We have to be in better physical shape and we have to be mentally ready to end games and close it out,” Loy said. “We’re putting the players through a pretty good grind in the summer so they’ll be ready.”

There will be plenty of changes on both sides of the ball for the Cobras in 2017.

On offense, the Cobras will replace quarterback Peyton Burns, who passed for 1,443 yards with 11 touchdowns and 16 interceptions last season. Rising senior Dell Thigpen will switch positions and become the leader under center for the Cobras in his final year.

“He’s doing a great job so far and he’s been a very vocal leader for us,” Loy said. “He gives us a lot of options at the position this year.”

The offense returns three offensive lineman and their top two rushers in the backfield, led by Thigpen.

Thigpen had a monster year for Wesson in 2016 as an all-purpose back. He rushed for 600 yards and seven touchdowns along with 350 receiving yards and two touchdown catches.

Along with Thigpen, the next two leading rushers, rising senior Trey Glasper and rising junior Jaquavion Harris return to form a formidable ground game for the 2017 season. Glasper rushed for 455 yards and four touchdowns last season while Harris ran for 311 yards and five touchdowns.

The biggest change on offense will be replacing senior wide receiver Will Hulon. Hulon led the team with 858 receiving yards and eight touchdowns last season and had a great connection with Burns on the field.

As a team, Wesson rushed for 1,911 yards and the combination of Thigpen, Glasper and Harris should put up big numbers once again.

“We have a really good group at the skill positions,” Loy said. “They can really do some things with the ball in their hands. We’ll be better up front as well with three of our offensive lineman returning.”

On the defensive side of the ball, the Cobras return their two leading tacklers from last season with rising juniors Jim Guess and Chamar Martin. At the safety position, Guess had 74 total tackles, eight tackles for a loss, three fumble recoveries and two interceptions. Martin had 71 total tackles, 53 of them solo tackles on the season. The defense also returns rising senior linebacker Jerry Barlow. As the leader on defense in the middle of the field, Barlow had 55 total tackles on the season.

The big challenge on defense will be replacing Bobby Pritchard and Matthew Craft. The two seniors combined for 92 tackles in the 2016 campaign and their presence will be missed.

Acy, rising senior Jeremiah Barlow and rising sophomore Damien Smith are other names to look out for in the 2017 season.

When the start of the season rolls around, Wesson will be mentally and physically ready to win ball games and close the deal.

That’s the one thing Loy wants.

“I want to see our expectation and attitude level rise that when we walk out there on the field, we know we can win,” Loy said. “I think our attitude will be better and I think our kids will be motivated.”