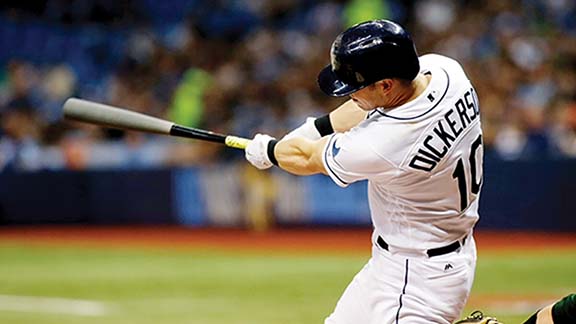 Corey Dickerson of the Tampa Bay Rays hits a three-run home run off Zach Neal of the Oakland Athletics in a game played this season.

Dickerson on pace for All-Star selection

Entering his fifth year in the majors, Dickerson changed his training for the game of baseball over the winter and lost 25 pounds to get in top shape for the upcoming season.

With the new diet and exercise program in the offseason, Dickerson is having a career year for the Tampa Bay Rays and it is possible that Dickerson is slated to make his first All-Star Game appearance in his young career.

Just in his second year with the Rays, the outfielder/designated hitter has become one of the most productive hitters in the American League with a .326 batting average, 16 home runs and 37 RBIs so far on the season.

As of Tuesday, Dickerson sits at third in the voting polls for the designated hitter spot on the American League All-Star team. He stands behind Matt Holliday of the New York Yankees and Nelson Cruz of the Seattle Mariners. If the voting trend continues like it is, Dickerson won’t initially make the All-Star team, but will be on the ballot for the final roster spot in the American League.

As of now, Dickerson leads the American League in hits with 93, third in batting average, tied for third in runs scored with 51, second in total bases and fourth in slugging percentage.

The gaudy stats for Dickerson have been partially related to his new spot in the batting lineup. Dickerson bats leadoff against right-handed batters and the new change in batting order has paid off. On the season, the BA alum is batting .319 against right-handed pitchers with 61 hits, 13 home runs and 27 RBIs.

The knock on Dickerson throughout his MLB career has been his struggles against left-handed pitching. This season, his numbers have been impressive against southpaws with a .344 average in 83 at-bats.

Dickerson is not your normal leadoff hitter in the lineup. The first player to bat is usually for speed purposes to get on base and score the first run of the game. Dickerson brings power and a high batting average to the top of the Rays’ lineup that most teams don’t have the opportunity to do.

According to ESPN’s Home Run Tracker, Dickerson has the four longest home runs on the season for the Tampa Bay Rays. The longest one came May 16 at the Cleveland Indians, when Dickerson launched a 453-foot blast to right field. The second longest came at home on May 20 against the Yankees that traveled 447 feet.

Even the best players in the world have a cooling off period and that time has come this past week for the Rays outfielder. Over the past seven days, Dickerson is batting .241 with one home run and four RBIs. With the All-Star Game coming up in a couple of weeks, the cooling off period for Dickerson could affect his voting for the game.

Dickerson has made major changes to his game and his approach at the plate and it’s working out with a possible birth in the 2017 MLB All-Star Game in Miami on the line.

In a postgame interview last week with Fox Sports Florida, Dickerson said making the game would be an honor, but he’s just worried about his team winning and making the playoffs.

Whether he’s named an All-Star or not, Dickerson has been a completely different player in 2017 and is not just a flash in the pan.

The Copiah-Lincoln men’s tennis team is coming off a No. 17 national ranking that was announced by the Intercollegiate Tennis... read more