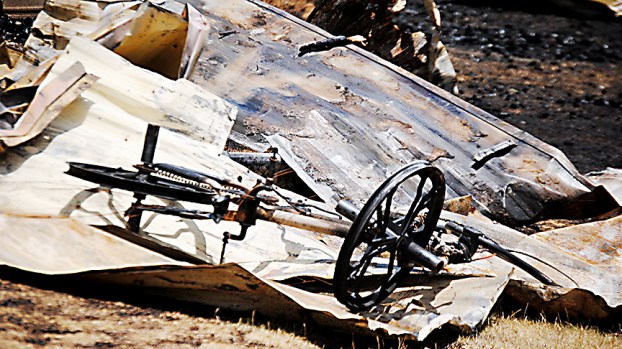 Photo by Matt Rushing/A burned bicycle is part of the remains of the Bogue Chitto home of Sheena Godbolt and her children, which was destroyed by fire June 11.

Pastor: ‘The children are victims’; community pitching in to help family

A Brookhaven pastor hopes the community will rally to help the two children of accused killer Cory Godbolt after their home burned earlier this month.

Godbolt, of Bogue Chitto, is charged with capital murder in the shooting death of Lincoln County Sheriff’s Deputy William Durr and seven counts of first degree murder in the deaths of his estranged wife’s family members and friends. All eight were killed over Memorial Day weekend.

On June 11, Godbolt’s mobile home burned to the ground. That leaves Sheena Goldbolt and her two children without a home.

“The children are victims, just as much as anyone else,” said Phillip Sterling, pastor of Grace Community Church. Sterling is acquainted with Godbolt. He also knew the individuals who were killed.

Sheena Goldbolt lost her and her children’s belongings that were in the house. No one was home at the time of the fire. According to the Mississippi Fire Marshal’s office, the investigation could take up to 45 days to complete.

Authorities have not said if the fire appears to have been set intentionally.

“It’s understandable that people are angry and upset but people need to realize that these children and his wife are victims,” said Sterling. “I can’t even begin to imagine what they are feeling.”

Sterling and Grace Community Church started a campaign to help out Godbolt’s estranged wife and her children, who are 10 and 8.

“We started a drive to try and get some clothing for the children because everything they had was lost in the fire,” he said.

Sterling said they’ve received positive response on social media, but very few donations have been given.

“Really, right now, we are sort of at a stand still trying to figure out what the next step will be. Hopefully we can get more people to make some donations,” he said.

Deedee Henning and some of Sheena Godlbolt’s friends are trying to help the women and her children.

A friend of Henning’s knew some of the victims and got her involved.

“Sheena’s mom and sister were both killed. Her sister had two kids, so Sheena has ended up with her two kids and her sister’s two kids,” said Henning. “My husband and I are foster parents and we’re just trying to help, it’s just in our nature. She doesn’t have many people to turn to.”

Donations of cash or clothes and other items can be dropped off at Brookhaven Honda, beside Home Depot. For more information contact her at bhondadeedee@yahoo.com.

Families on Storm Avenue plan to dish up more than ice cream and watermelon at their Fourth of July block... read more