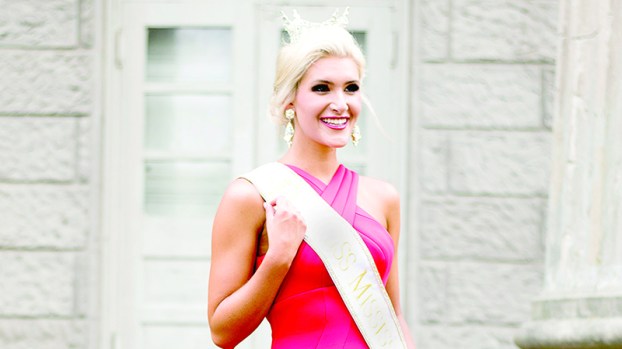 Photo courtesy of The Vicksburg Post/Brookhaven native Laura Lee Lewis won the distinction of being Miss Mississippi 2016, and competed for the crown of Miss America 2017.

It’s time for Brookhaven’s Laura Lee Lewis to let someone else be Miss Mississippi so she can fulfill her dream of becoming a school principal.

Lewis, 24, will crown the pageant’s winner Saturday night in Vicksburg in the 83rd annual scholarship pageant.

It’s been a busy year for Lewis, who won the crown last year in her fourth attempt at the title.

With it, she won a $10,000 scholarship and the chance to represent the state in the Miss America pageant in September in Atlantic City. She came in fourth runner-up at that pageant.

Now that her reign is almost over, Lewis, the daughter of Mark and Lorin Lewis of Madison, will finish her studies at Mississippi State University. She has one more semester to go for her degree in education with an emphasis in math and science. Then she’ll do her student teaching.

Because of her success in the Miss Mississippi and Miss America pageants, she’ll be able to continue her education and seek her master’s degree in educational administration.

She wants to be a principal, like her mentor Pam Fearn.

Lewis was born with mid-facial hypoplasia, which caused her upper face to be underdeveloped while her lower face was over developed. She couldn’t have the 16-hour corrective surgery until she was in her late teens.

Fearn was her principal at Brookhaven Elementary School and when cruel classmates taunted Lewis with names like “horse face” it was Fearn who helped take the sting out of their words with her compassion. She took the young Lewis aside and told her she could do anything.

“Reach for the stars. Don’t listen to the negativity. Make a difference,” she told her.

“She told me I had value, that I was special,” Lewis said.

“I made that my life’s work,” she said. “Mentoring is so important. It changed my life.”

Lewis said she watched Fearn not only change that elementary child’s life but others as well.

“Why would I want to be anything else but what Mrs. Fearn was to me? And that’s why I want to be a principal, just like her,” she said.

In her year as Miss Mississippi, Lewis has travelled at least 60,000 miles by car and countless miles by plane.

She’s enjoyed traveling the state “meeting as many Mississippians as I could,” she said. “There’s something about our state that’s special. Everywhere I go, I feel like I’m right at home.”

She was even able to squeeze in a few visits to Brookhaven.

“I always got so excited when I’d see Brookhaven on my schedule,” she said.

One of the highlights of her adventure was ringing her cowbell on the 50-yard line at MSU, much to the chagrin of her father, an Ole Miss alumni. “My sweet dad is a big time Rebel. The man bleeds red and blue,” he said.

She shared a stage with former Mississippi State quarterback Dak Prescott and even cuddled with President Obama’s dogs at the White House.

She’s also enjoyed her visits to Batson Children’s Hospital in Jackson and going anywhere to speak about Mentoring Matters.

“I didn’t realize the impact my story and my platform would have on people,” she said. “It’s important to show value to people. I feel like this is something that our nation, our world, needs to hear.”

She’s always been quick to tell people that her home will always be Brookhaven no matter where her adventures take her.

“I just want to tell Brookhaven, I appreciate their love and support and encouragement,” she said.

Construction will begin soon on the Willing Hearts Memorial Garden, which will be built in memory of longtime hospital supporter... read more