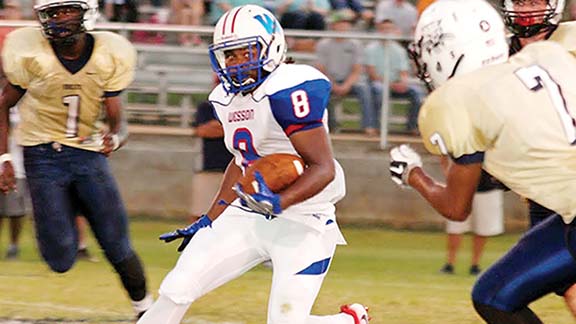 Dale Thigpen of Wesson runs the football in their win over Bogue Chitto last season. (Photo by Tracy Fischer)

Editor’s note: The Primetime 23 highlights the 23 best players in Lincoln County and surrounding areas for the upcoming football season. This is the first installment of the series.

As a running back in the 2016 season, Thigpen racked up 950 total yards of offense with nine total touchdowns. Thigpen was the consummate dual threat out of the backfield with 600 rushing yards and 350 receiving yards to lead the Cobras’ ground game.

This coming year, the rising senior will take the role as the starting quarterback of the Wesson Cobras.  His playmaking capabilities out of the backfield should bring a new dimension for an offense that has put up big numbers on the ground in the past.

With Thigpen under center, this becomes his team, as the younger players will look to his guidance and leadership to carry Wesson going forward.

“In the spring, he took the team over. This is his team,” Wesson head coach Jeremy Loy said. “He’s done a good job this summer and he’s been at all the workouts. He’s more vocal than he was last year. He’s got a great personality and the kids like him.”

“I’m glad I’m the quarterback this year because I get more responsibility and I can lead more,” Thigpen said. “I like having the ball in my hand every time. I feel like I can control everything.”

The quarterback is looked upon as the leader of every football team and a player that others can look up to for guidance and advice.

Thigpen has the leadership skills and personality to fill the checklist.

His fun-loving personality and sense of humor garners the attention of his teammates. Combining his personality, work ethic and athletic talent, Thigpen is ready to lead a potentially explosive offense.

“They don’t know if I’m going to run it or throw it,” Thigpen said. “They won’t know what to look for. Everything is going to be pass option so it’ll be hard to look out for.”

“He’s such an explosive player,” Loy said. “He’s been throwing the ball better over the summer. He’s really been working on that. He’s going to be a real dual threat for us. I always tell him, if we can get him past the linebackers, we’re going to have a chance.”

Thigpen takes over at quarterback for Peyton Burns, who passed for 1,443 yards with 11 touchdowns and 16 interceptions last season.

There was potential for Wesson last year with the Cobras starting off the season 4-2, but they ended the season losing five in a row, which were all against district opponents.

That fire still burns inside Thigpen and the rest of football team. Learning how to close out games is what the rising senior wants to see from his teammates.

“We just couldn’t close games out. We can score points, but just couldn’t seal the deal,” Thigpen said. “Finishing strong is something we’re working on and it’ll definitely motivate us to do better.”

Thigpen moving to quarterback opens the door for rising seniors Trey Glasper, Jeremiah Barlow and rising junior Jaquavion Harris to take more carries in the backfield and build an even stronger running game.

With the position move, Thigpen has high goals for the upcoming football season and wants his teammates to focus on making the playoffs.

The rest will take care of itself.

“Our offense can be ranked number one in 3A,” Thigpen said. “Anything can happen in the playoffs with our team. We just have to make it there first.”

First year head coach Blake Smith expected a much improved women’s team after a 3-9 season in 2016. With the... read more