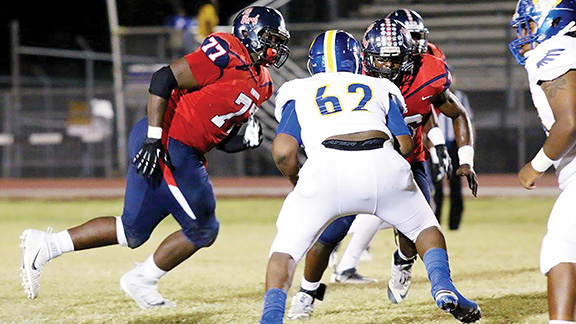 Jeffery Johnson of Ole Brook (77) rushes the passer in their win over Natchez last season. (Photo by April Clopton)

After the numerous Division I scholarship offers and recruiting visits, Brookhaven rising senior defensive tackle Jeffery Johnson has narrowed down his decision to two schools.

“I got my eyes set on two schools as of right now. I’m mainly looking at Ole Miss and Florida State,” Johnson said.

The hard work and dedication has paid off for the Ole Brook defensive lineman as Division I programs across the country have fought hard for his signature.

The recruiting process for Johnson has been long and tiresome, but each offer has shown the defensive tackle where he has come from since he started playing at Ole Brook as a freshman.

“Coming up through high school starting my sophomore year, I found my game a little bit more,” Johnson said. “That year I had to step up and play a little bit. I got the size, speed, and it still felt like I wasn’t getting noticed. I was praying for an offer, but I wanted to stay grounded, humble and see what happens.”

That strategy paid off for Johnson and in February, he received his first Division I offer from Florida State University.

Little did he know that more offers would come piling in as Johnson has reeled in a total of 18 Division I scholarship offers.

“Jeffery is not only a very talented football player, but he is a quality young man of character,” Brookhaven head football coach Tommy Clopton said. “He has progressed on the field and in the classroom to give himself some tremendous opportunities.”

With all of the schools knocking on his door, it got a bit stressful for Johnson, but the end goal would make it all worth it.

“At some points, the process got overwhelming and some times it wasn’t that bad,” Johnson said. “Everybody wants to know what school you’re going to and everybody asks me all the time. If you narrow your choices down, it gets a whole lot better. A lot of people ask me all the time.”

On the football field, it’s easy to see why Johnson is a highly touted recruit. At 6-foot-3 and 310 pounds, Johnson has great size at the defensive tackle position and is a force in the trenches. In his junior year for the Panthers, Johnson was fourth on the team with 51 total tackles and led the team with nine sacks on the season.

Even after a strong 2016 season, there’s always something to improve on for Johnson on the field.

“I can always find something to get better at and improve on,” Johnson said. “The seniors this year, we’ve been working hard to improve and win a championship. Since my class has been in high school, we’ve been through a lot.”

“We feel like Jeffery is someone who can be a difference maker for us on defense,” Clopton said. “We look for him to be a leader for us on and off the field this fall.”

After an 8-3 regular season in 2016, the season was cut to an end with a first round loss in the playoffs to Hattiesburg by a final score of 42-14.

Led by Johnson on defense, the talent is there on both sides of the ball to make a deep run in the playoffs and to get over the hump.

“We need to finish better,” Johnson said. “If we work together, communicate better and pick each other up through the good and the bad, we could go far.”

With his decision narrowed down to two schools, Johnson can focus more on his own game and making a deep run in the playoffs to possibly a state championship.

That perseverance has landed Johnson on the Primetime 23, something he’s grateful for.