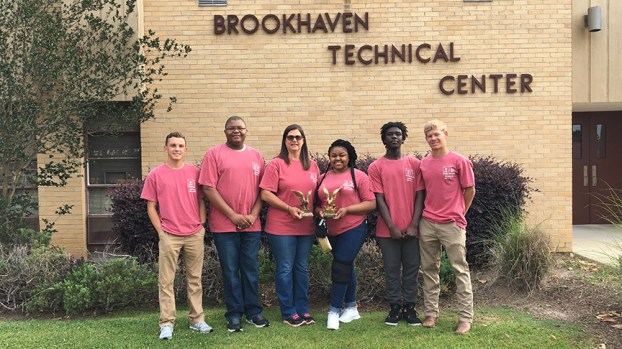 Representing BTC in the competition were Jessie Gilmore, Ja’Myra Hunt, Caleb McCreary and Christopher Robinson. Another student, Will Moak, was unable to attend but took part in the online portions of the competition.

The Quiz Bowl event was double elimination. After an opening round loss, BTC’s team climbed out of the loser’s bracket, winning multiple matches and defeating Alcorn County twice in the final round.

BTC also competed in the team challenge, which consisted of designing and producing an epoxy resin and pasta-reinforced composite with the goal of maximum flexural strength. BTC’s composites exhibited the best flexural strength, resulting in a first place position.

“It was really amazing to win, because we were the underdogs,” said team captain Robinson.

Robinson also placed first in the state for his online test score in Polymer Science II.

During Tuesday’s meeting of the Brookhaven School Board, member Willie “Doc” Harrison addressed the students and Polymer Science program director, Leigh Ann Peavey, who is a USM Polymer Science graduate and is in her second year at BTC.

“Mrs. Peavey on behalf of the board, we certainly appreciate the leadership that you have given,” said Harrison. “This is a fairly new program and you’ve hit the ground running. Students, I want to applaud you for what you’ve done. You were down but you got up, that’s the key. We’re so proud of you.”

In other business, the school board approved the following:

• Brookhaven High School Cheerleader Booster Club donated to Brookhaven School District Athletics $3,178 and BHS Softball Booster Club made a donation to BSDA in the amount of $1,693.24.

• BES PTA was approved to participate in the following fundraisers and charity events during the 2017-2018 school year: Family Fun Night, Walk-A-Thon, selling T-shirts, collecting donations of dog food and supplies for BARL and Operation Christmas Child, collecting change for a donation to Heifer International and holding a PTA spring fundraiser.

• Approval was given to BHS to partner with William Carey University in a dual credit program.

The next board meeting is scheduled for July 25 at 6 p.m.

The Boys & Girls Club of Lincoln County’s summer program will shut down for the summer in two weeks due... read more