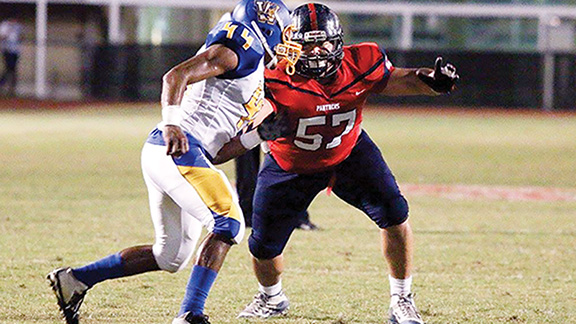 Brookhaven rising senior offensive lineman Trace Clopton (57) blocks down during their win over Natchez last season. This is the second year in a row that Clopton has made the Primetime 23, which is a preseason list of the 23 best football players in the local area. (Photo by April Clopton)

As the son of a coach, Brookhaven rising senior offensive lineman Trace Clopton has been under the microscope for a while.

Clopton will enter his third year starting on the offensive line for his father and head coach Tommy Clopton.

Playing for his father has been a blessing for the rising senior and each year as a starter, the chemistry has only gotten better.

“I can honestly say we both have come a long way over the past few years,” Trace Clopton said. “He’s always going to push everybody to be their best and just the fact that I am his son, he’s definitely going to emphasize it on me.”

Trace has been the anchor up front of the Ole Brook offense ever since he was a starter and his senior year will be no different, but Clopton has improved each year he has been with the team.

“Trace has worked very hard to maximize the talent that God’s given him,” Tommy Clopton said. “He works extremely hard not only in the weight room, but in the classroom as well.”

“I realized that I’ll never be the biggest or fastest so I always just try to set myself apart by being the meanest,” Trace Clopton said. “I’ve definitely got to keep working in the weight room.”

That hard work has earned Clopton multiple Division I scholarship offers, including offers from Memphis, Navy, South Alabama, Louisiana-Lafayette, Marshall and others.

In the beginning of June, Clopton and his dad took a visit to Oxford to participate in the Ole Miss Rebels camp.

Clopton is waiting for an Ole Miss offer, which would be a dream come true for him as a football player.

“I’ve prayed a long time for the opportunity to play college football,” Trace Clopton said. “I always enjoy my time in Oxford and I really enjoyed spending the day with coach Luke and getting to talk to Coach Freeze. Ole Miss is a huge deal for me and I am definitely doing all I can for that opportunity.”

As a junior, Clopton led a strong offensive line in the 2016 season. Clopton led the unit with an impressive 42 pancake blocks. Clopton also helped running backs Kenneth Dixon and Damarrell Leggett each rush for over 1,000 yards last season, leading a potent ground attack for the Panthers.

With the offensive line returning and rising senior running back Damarrell Leggett returning for one more year, the Ole Brook rushing attack could be just as good as last season.

“We’ve got a lot of starters coming back so maturity and experience are both a big deal,” Trace Clopton said. “We just have to continue to work and pull closer as a team.”

“Trace is a tenacious blocker that does a great job of finishing blocks,” Tommy Clopton said. “He’s grown into a leadership role on our team and does a good job of leading by example.”

The Ole Brook football team was struck by tragedy with the death of linebacker Jordan Blackwell. Blackwell was a leader on the team and the vocal leader on defense.

Even in darkness, Trace Clopton wants to keep fighting for his fallen teammate, which is something Blackwell would want his team to do.

“I can honestly say it’s been a great thing to see us come closer after losing a brother,” Trace Clopton said. “Jordan was a special piece of our team and more than just being a great linebacker. We’ve got to pull together as a team and continue to push each other because Jordan wouldn’t have had it any other way.”

With his strong sense of faith, his love for his teammates, coaches and the game of football, Clopton has improved on and off the field, earning his second straight appearance in the Primetime 23.

“This is a really big honor. We’ve got a very talented area and it’s definitely awesome to be recognized again,” Trace Clopton said. “It’s not just an honor for me, but also for my coaches, family, teammates and the Ole Brook community. They’ve all pushed me to where I am today.”