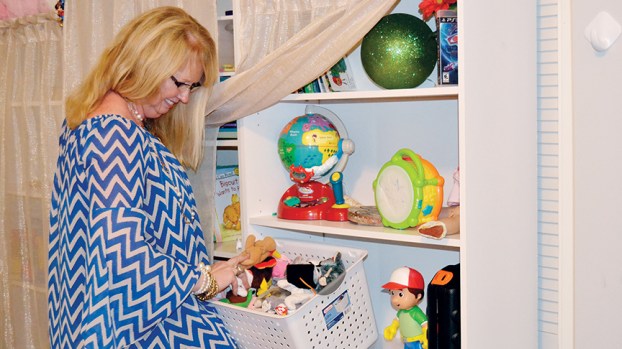 Photo by Donna Campbell/Professional organizer Diane Ryan shows an easy way to store children’s toys so they can be accessed easily while keeping the bedroom neat and tidy. Ryan held a ribbon-cutting Thursday for The Venue at Five Fifty, which she operates from her home.

Organizer opens The Venue for parties

Ryan, who also runs Declutter by Diane, held a ribbon-cutting ceremony for The Venue at Five Fifty, where she and her staff hosts weddings, birthdays, and other special occasions.

Ryan says she specializes in making special occasions special, and has been decorating parties for years. As a professional organizer, planning parties for others is not just a passion, it’s a natural progression.

At the ribbon-cutting, Ryan hosted a luncheon and offered a 30-minute “lunch and learn” discussion, “Professional Organizing Made Simple.”

Ryan, who has been organizing professionally for nearly six years, said most of her clients complain they’re overrun by clutter, no matter how often they organize their spaces.

“Clutter just keeps creeping back in,” she said.

The problem comes from hanging on to items that aren’t needed any longer.

She said clients want their spaces — home, office, closets, even refrigerators — to be nice and tidy, but they don’t want to get rid of anything.

Clutter can affect peace of mind, she said.

She offered basic tips for those who say, “I don’t even know where to start.”

The first thing is not to buy organizing supplies like plastic bins and baskets. Declutter first. Toss items that are broken, don’t fit or aren’t used. Then decide what is needed to organize what’s left.

Don’t try to do the entire house at one time. Take small areas and declutter them.

In kitchens, get rid of those appliances that aren’t used that are taking up valuable counter space. Toss out the extra water bottles or chipped dishes and cups. Pull everything out and sort like items. Put the most-used items at eye level.

“If you can’t see it, you’re not going to remember it’s back there and then it’s a dust collector,” said Ryan.

Ryan uses turntables that allow items in the back to be moved to the front and be seen. She hangs pots to make better use of vertical space.

In the living room, she suggests keeping new magazines on a coffee table and replacing the titles each month when the newer issue arrives. Donate board games that aren’t played to a daycare. Get rid of old DVDs.

“It’s the accumulation of things that creates clutter,” she said. “Clutter is putting items in places they don’t need to go.”

She said items that aren’t needed, loved or wanted don’t have a place in a tidy home.

“Donate them,” she said.

The master bedroom, she said, should be a sanctuary.

“You should not dread going there,” she said.

Keep side tables neat and uncluttered.

Ryan had special words of advice for women who own too many pairs of shoes.

“If they hurt your feet, no matter how pretty they are, don’t keep them,” she said. “Let them hurt someone else’s feet.”

The Lincoln County School Board Thursday voted to approve its $28 million budget which will require a 4 percent increase... read more