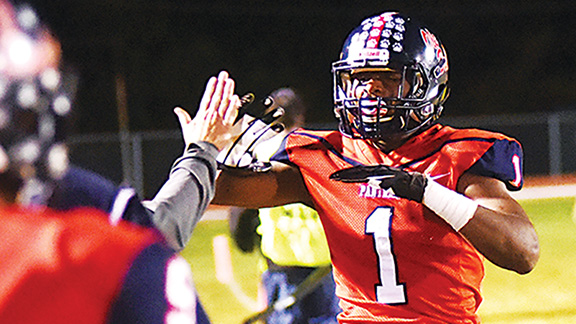 Brookhaven's Damarrell Leggett gets a high-five from the coaches after scoring a touchdown in a game played last season. (File photo)

The backfield tandem of Leggett and Kenneth Dixon was a dominant force, combining to rush for more than 2,200 yards for the 2016 season.

With Dixon graduating, Leggett becomes the workhorse of the Ole brook offense, so expectations will increase for the rising senior to lead the offensive production.

“The run game should be much better this year because me and my offensive line have been working really hard this offseason,” Leggett said. “My expectation for us is to grind even harder and be better than what we were last season.”

Leggett was a dominant force in the backfield for the Panthers, rushing for a team high 1,185 yards and 17 touchdowns for the 2016 season. His backfield mate Dixon rushed for 1,043 yards and seven touchdowns. Leggett also reeled in five catches for 121 yards and two more scores.

The chemistry the two backs built over the course of last season was something that helped Leggett tremendously in his growth as a football player.

“It was really an honor for me watching Kenneth Dixon on and off the field,” Leggett said. “He really helped me grow because he always pushed me and made me grind even harder.”

With his monster junior season, Leggett has received several junior college scholarship offers, including Copiah-Lincoln and Southwest Community Colleges. Leggett’s first offer was a Division I offer from Tulane University.

Even with losing starting quarterback Sevante Quinn for the second half of the season, the combination of Leggett and Dixon got the Ole Brook Panthers to an 8-3 record in the regular season.

The Panthers made the 5A state playoffs and lost to Hattiesburg in the first round by a score of 42-14. Leggett had a monster game against the Tigers, rushing for 140 yards on 24 carries and one touchdown, but his effort wasn’t enough.

That loss to Hattiesburg motivates Leggett to this day and the goal next year is to make it deeper in the playoffs.

“In order for us to get deeper in the playoffs, we have to work hard, practice hard and play hard,” Leggett said. “There’s not one playoff game that’s easy. It takes hard work, but we’re going to for our brother, Jordan Blackwell.”

The tragic loss of Blackwell has motivated the Panthers throughout summer workouts and the team will be playing in his honor.

There will be plenty of fight from the Panthers this coming season when they take the field and play for their brother and teammate.

“Our team is going to do there job in every position on the field,” Leggett said. “That’s what Jordan would want from us.”

The schedule provides a tough road ahead for the Panthers with games against Brandon, Pearl and Lawrence County to start off the season. With the help of Leggett in the backfield, an experienced offensive line and Quinn coming back at the quarterback position, the Panthers are well equipped for a strong 2017 season.

Pope transferring from MSU to JSU