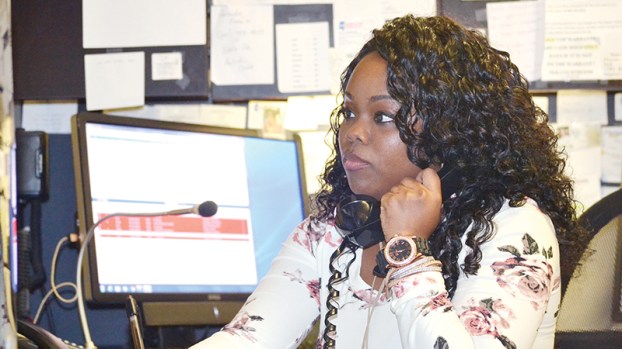 Photo by Donna Campbell/Audreana Ewing takes a 911 call Friday at the Brookhaven Police Department. Ewing, 27, is a dispatcher, single mom and nursing student.

She may look it. She may sound it. But Audreana Ewing is definitely not a kid.

The 27-year-old dispatcher for the Brookhaven Police Department stands all of 4-foot-9 and has a voice that’s somewhere between Minnie Mouse and Jessica Rabbit.

She gets questioned about her age all the time. People constantly guess wrong.

Strangers are amazed when they find out she’s nearly 30 and a mother of two.

“Nobody ever, ever believes that,” she said. “It’s a shocker. It’s just disbelief on their face.”

Her 5-year-old daughter, Brooklyn, will probably be small in stature like her mother. It’s genetics, Ewing said. Her mother was 5-foot-3 while her father was only 5-foot-1.

Ewing’s son, 7-year-old Karin, is almost as tall as his mama.

“I don’t have to bend very far to look him in his eyes and let him know I’m not playing,” she said.

Ewing moved to Brookhaven in 2009 with her family. Her father, Rev. William Ewing, planned to lead the congregation at Avery Chapel AME Church.

He died three months later from a massive stroke.

“We just stayed here. We didn’t go back home,” she said.

Ewing has been a police dispatcher for four years. She ran into Bobby Bell at Janie’s Pastry soon after he won the election as chief-elect. She told him congratulations and asked him about a job. He told her to come to the station.

She interviewed with Bell and she was offered the job two weeks later.

“I’ve been here ever since,” she said.

As a dispatcher, Ewing answers 911 calls for the city, dispatches calls to officers and checks the system for warrants when officers make stops.

She believes every call is important.

“I never let my guard down when I’m here,” she said. “I take every call seriously.”

For example, two years ago she took a call from a woman who was concerned that a tenant that had been evicted wouldn’t leave.

She was calm and sent two officers. The man barricaded himself inside his apartment with guns and fired on the officers. After a six-hour standoff involving police, Mississippi Highway Patrol, Lincoln County Sheriff’s Department and Mississippi Bureau of Narcotics, the man was killed.

“I didn’t know it would turn out like that,” she said. “But I took that call serious and said ‘Yes ma’am, we’ll send an officer right away.’”

It’s what she does for eight hours a day. She never knows what situation she’s sending officers into when she dispatches them to a call.

“I don’t care if your keys are left in your car, I take it serious,” she said.

And if they don’t update her on their status, she’s checking in by radio. She’ll ask them in her sweetest, calmest voice if they’re “66 with that subject,” which is her way of saying, “Are you OK?” Then she waits for their response.

“They get tired of hearing me saying it but I’m going to say it. If they don’t answer me, I’m going to call them. You just never know what your going to get,” she said.

In between calls, Ewing can be found at the dispatch desk, feet swinging from her chair, while she studies for her college classes. She is enrolled full time at Copiah-Lincoln Community College and plans to enter the nursing program in May. She wants to be a pediatric nurse at St. Jude Children’s Research Hospital.

“I love being a part of making a difference in somebody’s life,” she said.

She said her size will be an advantage when she’s a nurse because children relate to her better than other adults.

“I can go into a store and see a child and they will come up to me and hug me,” she said.

Since becoming a dispatcher, Ewing has learned patience. That’s something else that will help her as a nurse.

“I have patience that I didn’t know I had,” she said. “Patience is a virtue. I thank God I have it. I knew I had some patience but I know that it’s really there by working here these four years. Patience is in me and I’m thankful for it.”

Ewing is the baby of her family, but she’s also a mother hen to not only her mother and siblings, but to her “brothers in blue” at the police department.

She wants to take care of everyone.

She got her sister a job as a dispatcher at BPD and now she’s a secretary there. She got her brother a job at Nissan in Jackson and she helped her mother, who lives with her, get a job as a hairdresser.

She worries about her officers, even when she’s not on duty.

“My daddy would always say, ‘You’re the baby, but you’re the glue that holds us together,’” she said.

Bell remembers the day he met her at Janie’s. He said he was convinced she’d make a good dispatcher.

“She is one of the sweetest and most caring professional people I have known,” he said. “I tell her all the time she was raised right. She wants to be the best she can be. I love that about her.”

She wants that for everyone and she’s leading by example.