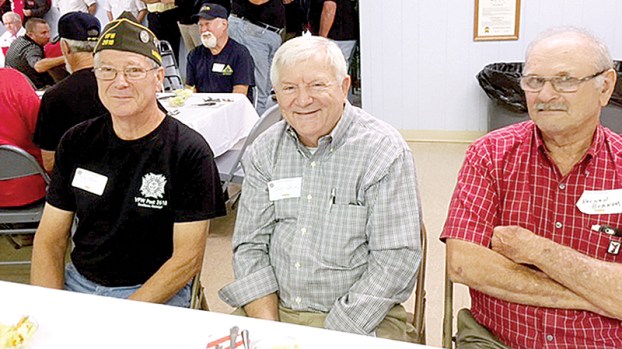 Vietnam combat veterans in Lincoln County were recognized recently at a dinner hosted by Veterans of Foreign Wars Post 2618.

Veterans who served in the combat theatre of operations during the Vietnam War as well as their families were treated to a meal and recognized for their service and sacrifices during and since the war, said Post Commander Ken Powell.

The dinner was held in commemoration of the 50th anniversary of the war.

This was the first such dinner held in Lincoln County to honor combat veterans of the Vietnam War. The Capt. Danny D. Entrican Post 2618 of the Veterans of Foreign Wars wanted to honor those “who had boots on the ground in the combat of operations,” Powell said. “They’re the ones who came home and suffered most of the indiscretions. They didn’t get the public recognition that they deserved.”

Presentations were made to the honored veterans by Sen. Sally Doty, Brookhaven Mayor Joe Cox and Norm Copeland, who serves as the commander of the Mississippi Department of Foreign Wars. Copeland was also the guest speaker of the event.

“Our Vietnam vets have taught us an important lesson,” said Doty, R-Brookhaven. “We should never confuse the service of a warrior and the opposition to a war. These men and women made such sacrifices and were often unfairly met with anger and condemnation. Anything I can do to show respect to these veterans is important to me.”

Cox said it was an honor to share the evening with those who served so bravely in Vietnam.

“That was such an unpopular war and those men were not received home with the recognition they so deserved. As we celebrate this Independence Day, let’s not forget these veterans and all the men and women that serve our country.”

Powell said the event was a small way of showing gratitude to the veterans and their families. Thirty-eight combat veterans were presented with medallions and coins at the dinner.

“As a community, we say ‘thank you’ to these veterans and all other veterans of the Vietnam War as well as their families,” Powell said. “Your selfless service and devotion to duty, and the sacrifices each of you made in serving our nation or in supporting your loved ones as they served and as they’ve dealt with the aftermath of their service, are appreciated and worthy of honor.”

Powell said many combat veterans were not met with cheers when they arrived stateside. They did not get the recognition or gratitude they deserved.

“Thank you all for what you have done for all of us,” he said. “And welcome home. Job well done.”

The VFW plans to host another event later this year or possibly in the spring for all Vietnam veterans in Lincoln County, Powell said.