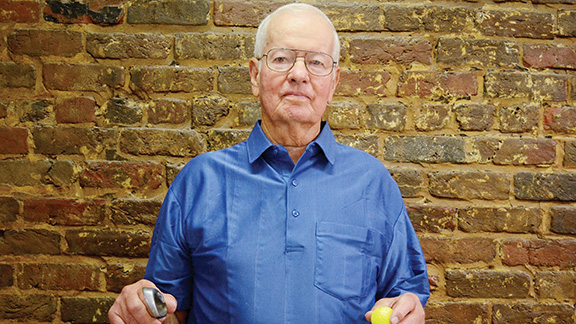 It was just another day on the golf course for 81-year-old Brookhaven resident Glen Martin.

Now retired for several years from being a traveling pastor throughout the state, Martin comes to the Brookhaven Country Club every Thursday morning for the senior scramble.

Recently, on the eighth hole at the course, Martin took the 8-iron out of his golf bag, lined up his shot and struck the golf ball off the tee.

“We weren’t doing too well on the day up to that hole,” Martin said with a laugh. “I took my 8-iron, hit the ball on the green and it started to curl and roll in a weird way.”

It’s his sixth hole-in-one of his golf career.

“We thought we could still see the ball on the green when I first hit it,” Martin said. “We drove the cart to the green and noticed we could see a tiny bit of the ball, but not all of it. It happened to be leaning against the pin and the ball just dropped in.”

The 8-iron club was one Martin had for many years and was the best possible option for the short hole at eight.

He used a neon yellow Wilson golf ball, so it’s easy to track just in case he lost it in the water or in the trees.

He wouldn’t lose this one.

“I always use this ball because it goes in the water sometimes,” Martin said laughing. “That hole-in-one helped our team out only a little bit.”

His group for the senior scramble finished nine under for the day, but there were multiple groups that finished ahead of Martin’s group so the hole-in-one only helped a little.

“It was a fun moment and a fun day for all of us,” Martin said. “It only helped us a little bit, but we all enjoyed it.”

Golf is a game that Martin likes to play for fun at his age to stay in shape and get his mind off things. He tries to make it to the country club to play three times a week and tries to make the senior scramble every week.

Martin has had a pacemaker for about 30 years, so playing golf gives him the exercise and energy to keep his body running.

“I’ve gotten to know a lot of people through the game of golf,” Martin said. “I enjoy being around the fellas and being together with them brings me great satisfaction. It’s a part of my life.”

Out of the six hole-in-ones that Martin has hit, it was hard for him to say which one was his favorite. Each one has a special meaning to him.

“It’s always special to hit a hole-in-one. I’ve been blessed to hit six of them,” Martin said. “I’m several years older than when I hit the last one.”

Playing a game that makes him feel strong and healthy has taken Martin many places in his life and hitting his sixth hole-in-one gives him more satisfaction.

“I’m just glad I can still hit the ball on the green,” Martin said.