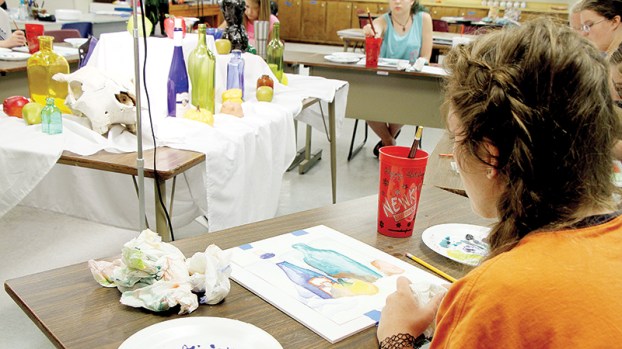 Photo submitted/Students learned both basic and advanced techniques at art camp at Copiah-Lincoln Community College last summer. Registration is under way for the remainder of this summer’s camps, which will focus on tennis, music and art.

Summer may mean a break from school, but it doesn’t mean the learning stops. Copiah-Lincoln Community College’s Wesson campus has several camps planned to sharpen skills and beat boredom.

Some camps have already happened, but registration is underway for tennis, music and art camp. Visit www.colin.edu/community-programs for more information.

Art camp for ninth through 12th grade is July 10-12 from 1-4 p.m. Campers will learn computer art, ceramics, drawing, painting and printmaking. The cost of the camp is $25.

Students will participate in choir and master classes and will be provided vocal lessons.

Camp will be led by Co-Lin Wolfpack head coach Blake Smith. His assistants will be Brenda Smith and members of the Wolfpack tennis team.

To register for tennis camp email Smith at blake.smith@colin.edu.

Smith said this is the second year for the camp at Co-Lin. About 25 students participated last summer.

“We were really pleased with our numbers,” he said.

Smith, a nurse practitioner, teaches fundamental strategy of the game. Students will participate in singles matches and also doubles “to promote good communication,” he said.

The experience level of campers can range from beginner to advanced and players will be placed with campers with similar skills, he said.

“We had some who had never picked up a racket,” he said.

He’ll have Wolfpack players on each court to assist.

“Some are international players who had a very successful season,” he said.

Smith said campers should dress for the heat and wear good fitted shoes. It’s helpful to have a tennis racket but not required.

Do you know our country’s history?

The Fourth of July, also known as Independence Day, has been a federal holiday in the United States since 1941.... read more