Veals graduated from Brookhaven High School in the summer of 2014 and has recently burst onto the scene for the Braves.

In the 2016 season, Veals led the team in receiving with 617 yards and seven touchdown receptions for the year. Veals joins the All-SWAC first team with teammates Marquis Warford and offensive lineman Timothy Gardner. Warford made the team in the all-purpose slot.

The Ole Brook alum led an improving passing attack for the Braves, as the team averaged just over 215 yards per game through the air with Veals being the main recipient of the passing game.

Veals started all 11 games for the Braves, with the team ending the season with a 5-6 record in their first year without former head coach Jay Hopson.

Even with a 5-5 overall record, Alcorn State made it to the SWAC conference title game and fell to rival Grambling State by a score of 27-20 to end the season at 5-6. With the Braves up 17-14 at the end of the third quarter, Grambling State outscored Alcorn State 13-3 in the final quarter to pull away and won the conference title. Veals led the Braves in receiving with four catches for 86 yards in the title game.

Entering his redshirt junior year, Veals should have an even bigger season being the primary target in the passing game and with starting quarterback Lenorris Footman returning.

Veals and the Braves will get another shot at Grambling State on the road Oct. 21 and possibly again in the SWAC title game.

Look for the former Panther Veals to have an even bigger season. 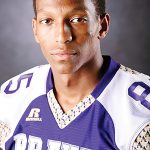 It was just another day on the golf course for 81-year-old Brookhaven resident Glen Martin. Now retired for several years... read more