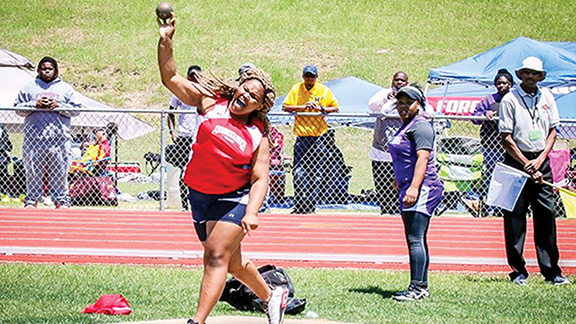 Rising freshman at Brookhaven High School Ah’Menya Rancifer has been considered a budding track star for a while.

Her specialty comes in the shot put competition, which she has been participating in since the seventh grade. Her skills have only gotten better since then.

Just recently, Rancifer won first place in the women’s shot put competition in the South State meet and came home with the bronze metal in the 5A State meet to end the school year.

Now entering her freshman year at BHS, her goals remain the same, but there’s still much to improve in order to reach those goals.

“She’s throwing about 38 feet right now. We want her to throw around 42 feet and even more next year,” her mother, Annie Rancifer, said. “It’s going to take a lot of determination and a lot of exercise to get to where she wants to be.”

“I feel like I can compete in the Olympics one day,” Rancifer said. “I just have to continue what I’m doing and keep working hard.”

At 14, Rancifer has her whole life ahead of her and is already competing with students well above her age group.

Rancifer comes from good genes in the family with Annie Rancifer winning a state championship in shot put for Brookhaven High School in 1994.

Rancifer started participating in track at Alexander Junior High School and went undefeated. The competition was too easy for her and as a result, she was called up to compete with Brookhaven in only the seventh grade.

“She was blazing past everyone. She made it look easy,” her mother said. “That’s when I knew she was going to be special.”

Rancifer said that coaches come up to her all the time to see what she can do and colleges all around the state have taken notice of her ability in the shot put.

Because of NCAA rules, the coaches can’t talk to Ah’Menya because of her age, but they come up to her mother.

“It’s crazy to think all these coaches are wanting to see me compete,” Rancifer said. “I’m just so thankful and I have to keep on working.”

In order to keep on competing over the summer, Rancifer was contacted by Hattiesburg High School to compete in the summer league for the team.

So far in the summer, Rancifer won a gold medal in shot put and a silver medal in discus in the USATF summer track event.

“Her schedule is ridiculous and her summer has really been taken from her,” her mother said. “We never participated in summer track before so we didn’t know what to expect.”

“It’s been so much fun for me,” Rancifer said. “You never know where you’re going to go.”

The busy summer for Rancifer continues this weekend by traveling to Huntsville, Alabama to compete in the USATF Junior Olympics on July 8-9. After that, the mother and daughter will be making a trip to Ypsilanti, Michigan for the AAU Junior Olympics the following weekend.

Rancifer has no shortage of confidence in herself and her abilities have given her a reason to be confident as a track star.

Not only is she talented, but she’s mature beyond her years.

Younger athletes growing up in the Brookhaven area are starting to look up to Rancifer as a role model and want to be like her.

“Everything happens for a reason,” Rancifer said. “It’s truly a blessing that people look up to me like that. I never thought that would happen.”

Rancifer and Jordan Blackwell were very close friends and she was with Blackwell the night before he died during the tragedy in Bogue Chitto and extended into Brookhaven. The next morning when they found out Blackwell died, she reacted in the most mature way possible.

While sad and heartbroken, she knew there was nothing she could do about it.

“She told me, ‘It’s life. You live and you die’,” her mother said. “She knew that they were just together and she decided to keep it at that. That’s all she wanted to remember. What 14-year-old thinks like that? It’s truly amazes me.”

At the Brookhaven athletics banquet, Rancifer won the first-ever Rising Star Award, an award made just for her.

Her maturity as a young teenager and athletic abilities have carried Rancifer a long way and that will only continue in the future.

“Her dad always says she always takes initiative that you don’t think she should be able to do, but she does it,” her mother said. “Her mind is so mature for her body and I feel like God has something planned for her, but we just don’t know what it is. We’ll have to wait to see what it is.”

The Primetime 23 recognizes the 23 best football players for the upcoming season in the area. West Lincoln rising senior... read more