For the first time in his Major League Baseball career, Corey Dickerson will be playing in the MLB All-Star Game.

Tuesday on Fox — and in front of the entire nation — the 2008 graduate of Brookhaven Academy will be the starting designated hitter for the American League All-Star team.

Dickerson was the only Tampa Bay Rays player selected on the American League roster. He was also chosen by popular vote, which is impressive considering Tampa Bay is a smaller market team.

As Dickerson’s success in the MLB has grown, his impact has rubbed off on people at Brookhaven Academy and in the Brookhaven community.

“It makes our job easier because we can tell our kids that this guy was in your shoes one day and he worked hard enough to make it,” said Tyler Parvin, BA’s head baseball coach. “There’s a chance that one day someone from here could be the next Corey Dickerson.”

Parvin hopes to get Dickerson back to Brookhaven in the off-season for a baseball camp. One thing that is exciting for Parvin to witness throughout the community is the growing interest in baseball.

“I think it brings recognition to baseball in our area,” Parvin said. “I’ll be at the sports complex (Lincoln Civic Center Baseball Complex) and I will hear kids talking about how they want to be like Corey. He’s a hope for kids in the community as well. If you’re a kid from small town Mississippi, if you work hard enough, you can be a major league All-Star.”

Parvin, who played baseball with Dickerson at Brookhaven Academy, stays in touch with him. They recently talked on the phone briefly after Dickerson made the All-Star team. Parvin  plans to attend the game in Miami.

“I hope he continues his success and goes back to the All-Star game yearly,” Parvin said. “Hopefully he can make the playoffs and win the World Series one day. I wish nothing but the best for him, he’s a great guy.” 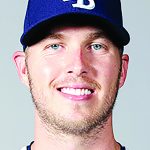 Three die statewide in traffic accidents on Fourth of July holiday weekend, none in Southwest Mississippi