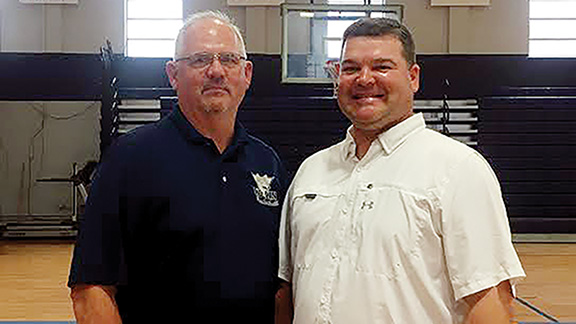 Gwyn and Lane Young pose for a picture at Copiah-Lincoln Community College. Pictured are, from left: Gwyn Young and Lane Young. (Photo submitted)

“I’m excited about the opportunity to serve the student-athletes, administration, staff, and coaches,” said Young. “I grew up on the Co-Lin campus and some of my best memories were made here as a child, student-athlete, and coach. Co-Lin holds a special place in my heart, I look forward to helping improve our overall athletic program.”

Young, a Wesson native, is a graduate of Wesson Attendance Center. He came to Co-Lin in 1996 on an athletic scholarship and pitched for the Wolfpack baseball team under former head coach Keith Case.

He received his bachelor of science degree in human performance from the University of Southern Mississippi in 1999. During his time at USM, Young began his coaching career by volunteering at Co-Lin to help his father. The Lady Wolves went on to win the MACJC State Championship and the NJCAA Region XXIII Championship in 1999.

From 1999-2002 Young continued his education at William Cary University and received his master’s degree in secondary education while coaching softball and girl’s basketball at Wesson Attendance Center. Young led the Lady Cobras to their first district title in softball in 2002.

Young coached at West Lincoln Attendance Center from 2002-2017 in a variety of roles.

He is married to the former Audrey Monroe of Brookhaven and they have two children, Mailey Kate, 12, and Reece Landry, 3. They attend First Baptist Church of Brookhaven.

Rising freshman at Brookhaven High School Ah’Menya Rancifer has been considered a budding track star for a while. Her specialty... read more