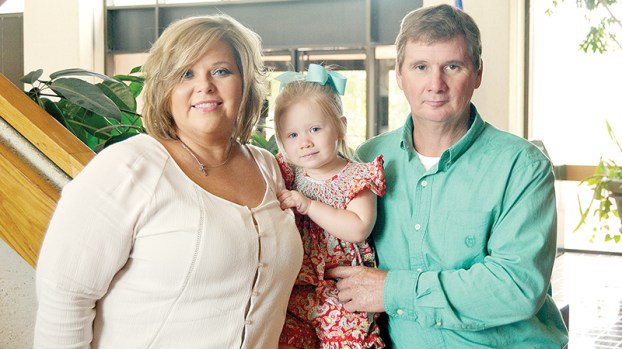 Photo by Donna Campbell/Brookhaven’s Deputy City Clerk Samantha Melancon was named city clerk by the city’s board of aldermen on Wednesday. Pictured are, from left: Melancon, daughter Alexis and husband Alan.

Samantha Melancon knows all about juggling.

She’s been doing it successfully for several years — motherhood, marriage and job — so it was no surprise Wednesday when the Brookhaven Board of Alderman chose Melancon to take over the duties of city clerk.

“I appreciate the mayor and the board of alderman for having faith in me to serve in this capacity. I look forward to working with them over the next four years,” she said.

Melancon is replacing her boss, Mike Jinks, who retired June 30. He had been city clerk since 2004, earning the position through the election process then. Lawmakers recently opted to make the clerk’s job appointed by the board rather than elected by the public.

Brookhaven’s new city clerk was born and raised here. She’s an Ole Brook graduate, Class of 1996, and received her associate degree in business administration from Copiah-Lincoln Community College in 1998.

After college, she started work at State Bank in downtown Brookhaven. She was an officer for the information technology auditor for nine years before making the switch to government employee.

“I just wanted to try something new,” Melancon said.

In 2007, she became an office administrator for the director of public works and the building inspector’s office. In 2009, she started helping Jinks and the city clerk’s office as a bookkeeper.

“At one point, I was working for all three offices and it was a lot to do, but I enjoyed it,” she said.

In 2014, Melancon completed a three-year course to become certified in the training program for municipal clerks and tax collectors that was conducted by the Center for Government and Community Development by the Mississippi State University Extension Service.

She and her husband, Alan, have been married 14 years. Their daughter, Alexis Grace, was born in 2015. They attend Southway Baptist Church.

She joined Jinks’ office full time when she returned to work after her maternity leave.

“I started shadowing Mike on how to do the city clerk job,” she said. “I don’t know everything that Mike knows because he was here for so long, but I will one day. It’s a learning experience and it can be frustrating at times because I want to know everything now.”

Jinks, who retired to his home in Gulf Shores, Alabama, said he’ll be available for telephone consultations if she needs him. Since he recommended her for the job, he doesn’t think she’ll need to call.

Being a Brookhaven native, Melancon is excited for the future of the city. Working downtown is something she loves to do.

“My grandma lived on South Church Street right beside Brookhaven Elementary, so I grew up downtown. I love this city so much, I’m looking forward to watching our city grow and being a part of it,” she said. “I’m thankful to be given this opportunity to serve the city of Brookhaven as city clerk. With the help of God and my office staff, I will serve the citizens of Brookhaven to the best of my ability.”

Two years ago, Sharon London’s sister was murdered in front of her children. Her loss feels like it happened just... read more