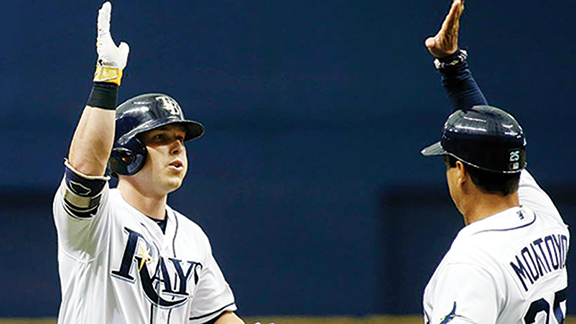 Corey Dickerson celebrates a home run in their win over the Baltimore Orioles earlier this season. The BA alum will bat seventh in the 2017 All-Star Game. (Photo courtesy of Tampa Bay Rays)

Dickerson will be in a lineup with the best sluggers from the American League, including Yankees outfielder Aaron Judge, three Houston Astros in George Springer, Jose Altuve and Carlos Correa, and more.

It was announced on July 2 that Dickerson won the designated hitter spot and will make his first All-Star game appearance of his career. Dickerson just edged out Yankees veteran Matt Holliday and Mariners slugger Nelson Cruz in the voting.

Dickerson is very deserving of his spot in the game and his numbers have shown that. In his fifth year in the majors, Dickerson is putting up career numbers with a .312 batting average, 17 home runs, 42 RBIs and 107 total hits, which is good for sixth in the American League.

The first three months of the season, Dickerson was heating up at the plate with the high average and slugging percentage. It’s natural for a player performing that well to eventually go through a cooling off period.

That cooling off period came at the right time. Over the last seven days, Dickerson is batting  .158 average, only going 3-for-19 at the plate. The All-Star game will provide Dickerson a good opportunity to get his game back on track against the best competition.

Dickerson and the rest of the American League All-Stars will have a tough task at hand to start the game going against National League starting pitcher Max Scherzer. Scherzer owns a 10-5 overall record on the season with a 2.10 ERA with a league high 173 strikeouts.