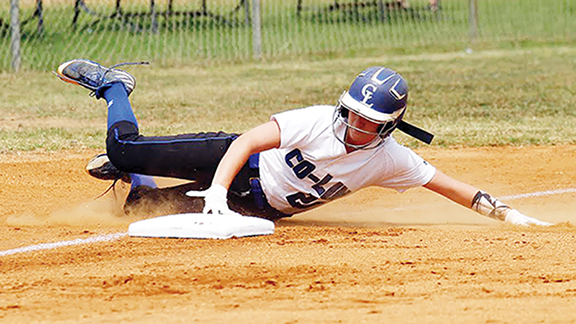 Kamryn Vanlandingham of Co-Lin slides safely into third base on a steal attempt in a game played this season. (Photo by Natalie Davis)

Co-Lin’s golf team finished the season No. 4 in the nation in the final coaches poll, and added to that success with the fifth best GPA (3.50) in the nation.

The awards follow the Wolves’ 28 individual academic awards that were awarded earlier in the summer.

Two players from the golf team made the All-Academic team, including Cole Arseneault from Baton Rouge, Louisiana and Joseph Dendy from Brandon.

Four athletes from the women’s soccer team made the All-Academic team, including Kelsi Barron of Magnolia, Laura Blailock of Summit, McKenzi Turpin of Slidell, Louisiana and Raven London of Vicksburg.

Five athletes from the softball team made the All-Academic team, including Dianna Hobgood of Columbia, Kamryn Vanlandingham of Hazlehurst, Karry Callahan of Vicksburg, Kayla Britt of Wesson and Logan Deroche of Houma, Louisiana.