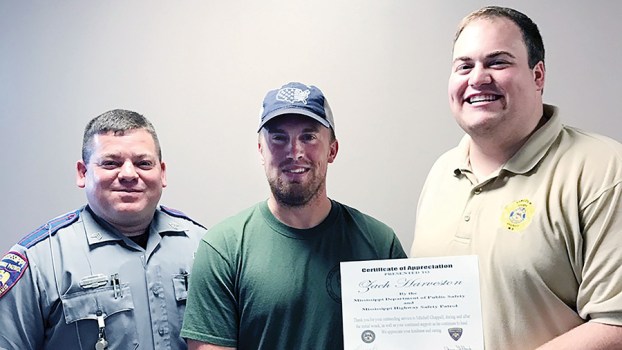 ‘I stand for what’s right and ethical’: LCSO communications officer loves to give back to community

Dustin Bairfield once saw something special in a Loyd Star teenager and urged him to pursue a career in law.

Bairfield, now the Lincoln County Circuit Clerk, was a captain for the sheriff’s office. Since then, that teenager — Zach Harveston — has become a full-time communications officer for the Lincoln County Sheriff’s Office and the Mississippi Highway Patrol, dispatching deputies and state troopers on emergency calls with a calm demeanor.

“Over the past seven years, I have watched Zach grow into a mature young man who has set goals for himself and is in the midst of achieving those goals through hard work and dedication,” Bairfield said.

Harveston, 23, is also a senior at the University of Mississippi with his eye on a juris doctorate from Mississippi College School of Law.

The son of Freddie Harveston Jr. and Catherine D. Harveston, both of Brookhaven, Harveston has a goal of one day working in the district attorney’s office.

He’s been working this summer at his job with the county, pulling 12-hour shifts just like he did when he wasn’t in school full time.

He enjoys being a dispatcher for 911 calls because it’s an opportunity to give back to others.

“At the end of the day, you know you have served your community well,” he said.

He said it’s sometimes difficult, knowing that he’s sending one of his friends into possibly dangerous situations.

“I give it all to God,” he said. “Every time you send a first responder, paramedic, firefighter, anyone who could be in danger, I always lift up prayer for them,” he said.

Someone who wants to be a dispatcher needs to have patience and compassion for others, be courageous and be able to remain calm under pressure. It’s also helpful to have passion to give back and serve the community.

It can be stressful, he said. He has walked callers through CPR and kept people alive until paramedics arrived. He hasn’t helped deliver a baby by phone, but he knows others who have.

He could if he needed to, he said. He just hasn’t gotten that call.

His desire to be an attorney is a matter of ethics.

“I’m very passionate about the law,” he said. “I stand for what’s right and what’s ethical in all situations.”

MHP trooper Mitchell Chappell recently presented his friend a certificate of appreciation for Harveston’s fundraising efforts. Chappell was injured on a traffic call last year and Harveston opened an account and designed and sold T-shirts to raise more than $16,000 so Amanda Chappell could spend more time with her husband.

Chappell is still in rehab, but getting stronger every day, Harveston said.

“He’s a good guy who is always willing to help others,” he said.

When the lights come on in the city