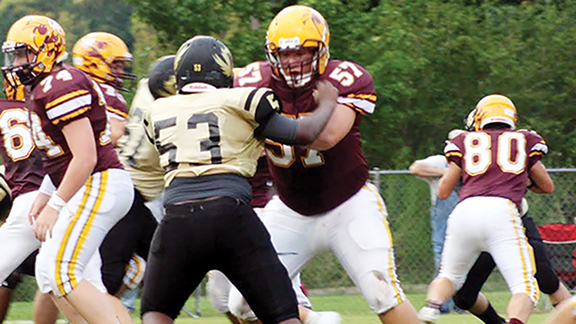 Noah Diamond of Enterprise (57) drives through a block in a game played last season. Diamond leads an experienced offensive line to help continue a tradition of a strong rushing attack entering the 2017 season. (Photo by Christy Boyte)

Enterprise rising junior offensive lineman Noah Diamond remembers the moment when his love for the game of football took off.

As a seventh-grader, Diamond felt like he was good enough to compete at the high school level, so he practiced with the high school team and went against them in drills. He got beat pretty quickly.

“They drove me out pretty quick, but they always told me I was doing a good job so that was pretty cool,” Diamond said.

The next year as an eighth-grader, Diamond went up against the seniors and beat them.

His love for football took off from there and he knew at that moment that he could make himself great.

“I wanted to get better and better at football every single day since that moment,” Diamond said. “That was a pretty awesome moment for me.”

Now a rising junior on the Enterprise offensive line, Diamond has not only become a great offensive lineman, but he’s now looked upon as a leader to help direct all of the younger players on the team.

His development as a player and a leader has earned him a spot on the Primetime 23.

“I wasn’t expecting to be on there, but it feels really good,” Diamond said. “It’s nice to know that our coaches think we’re good enough. It’s just a really good feeling making this list.”

The offensive line is a big part of the Enterprise offense that emphasizes running the football. Diamond and the offensive line helped the rushing attack gain over 2,200 yards on the season and 16 total touchdowns on the ground.

As only a junior, Diamond believes the offensive line can make a major leap in 2017.

“I think we’re going to be pretty good as a unit,” Diamond said. “Our group has been working really hard this offseason and our running backs have been working hard as well. The people that are still down here are really close and will solve problems together when things get bad.”

Diamond was frustrated with how last season ended, losing their final five games to end the 2016 season 3-7 overall. Diamond admitted that at times, teammates would get frustrated with each other and that might have had an effect on how the season turned out.

Chemistry has been improving since last season and Diamond feels that can swing Enterprise in the right direction in 2017.

“We got frustrated at each other when things weren’t going right. We started arguing with each other during games,” Diamond said. “At times, we seemed more focused on getting after each other than focusing on the game itself. That’s definitely motivated us to be better this year and to make sure that never happens again.”

The offseason workouts for the Yellow Jackets feature mandatory and optional workout programs. As a leader, Diamond has showed up to every workout and has implored his teammates to show up to every single one as well.

Diamond says the turnout has been good and the team can be better because of it.

“We have a lot of guys that are showing up to the offseason workouts and that’s been really encouraging,” Diamond said. “It’s really helped us come closer together as a team. We’re going to pound it on the ground and force defenses into a tough situation.”

With the top two running backs returning along with the majority of the offensive line, expectations will increase for the Enterprise offense.

The goal for Diamond is to play college football and he believes his work and dedication to the game of football will get him to his ultimate goal.

He’s knows the process is a long road, but he’s ready for the challenge.

“I’ve worked really hard for that opportunity,” Diamond said. “I love football and to play at the next level would be a dream.”

Leo Lewis strongly denies Rebel Rags accusations made against him