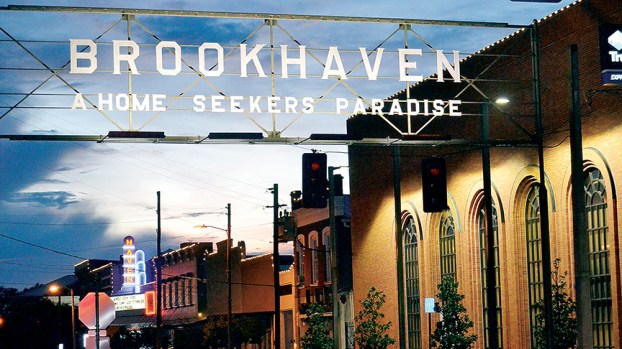 Photo by Donna Campbell/Over 4,500 linear feet of LED lights stretch across the edges of rooftops in downtown Brookhaven to provide an appealing, brighter and safer atmosphere.

When the lights come on in the city

Last year, the Brookhaven Trust, an organization that started in 1991 in an effort to promote cultural events in Brookhaven, started a roof-top lighting project. The idea was to line the tops and sides of buildings with lights to create a safer, brighter and more appealing atmosphere downtown.

The project began with the Brookhaven Chamber of Commerce rooftop in June 2016 and has grown since then. Nearly every building downtown now has rooftop lights.

Jason Snider, former president of the Brookhaven Trust and now an alderman for Ward 4, said the project is nearing completion.

“We’re actually going to have a couple of buildings in the next month getting lights,” Snider said. “We just ordered 300 more lights. The new We Frame It location on Monticello Street will be getting lights and also the Lofton’s Building on Whitworth Avenue.”

Snider hopes the two new locations that are participating in the project will be shining brightly by the middle of August.

The cost to install the LED lights is $10 per linear foot, which is paid for by the participating businesses. The lights have a timer that turns them on at sunset and turns them off at 11 p.m.

“Right now we have 59 parcels participating in the rooftop project,” Snider said. “Over 4,500 linear feet of lights have been strung throughout downtown.”

Other properties and business owners not located in downtown, such as Expectations and Broma’s Deli located on Brookway Boulevard, have purchased lights and installed them as well.

Snider is encouraged to see business owners participating in the project and hopes the momentum continues.

“The lights give the downtown area a little pop,” Snider said. “People notice it and I think it looks great. I’m all for new ideas. This is all about seeing the bigger vision to move downtown forward.”

Snider’s goal is to see all of the downtown building owners participate in the rooftop light project. For more information on how to participate, contact Snider at  jsnider@bbimail.net.

Brookhaven Little Theatre shared a larger slice of the Mississippi Arts Commission’s funding pie this go around as the state... read more