He and his wife loved their family and hosting family and friends in their home. He loved hunting and especially being in a duck blind and goose field with friends and family. He lived abroad with his family in Belgium, Italy, Germany, and in the U.S. in Mississippi, Arizona, Texas, California, Florida, Maryland, Louisiana and Georgia.

Memorials may be made to The American Cancer Society. 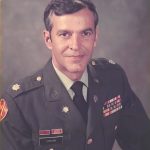 Memorial services for Clark Douglas Gunnell, of Ruth will be Saturday, July 15, 2017, at 2 p.m. at Providence Baptist... read more