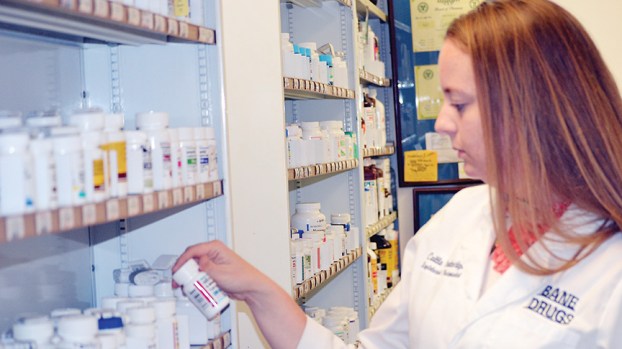 The number of prescriptions for painkillers filled in Lincoln County last year was greater than the population.

He said in 2016, the estimated population of Lincoln County was 34,523. In that same year, there were 40,732 prescriptions filled for opioids.

“That’s a really good barometer of just how big the problem is,” he said.

For comparison, Hinds County, where the population was estimated at 245,000, not quite 200,000 prescriptions were filled. That’s still a lot, but not more than the population.

Opioids are a family of painkillers that work on the nervous system, drugs like morphine, fentanyl, oxycodone, hydrocodone and even heroin. According to the Center for Disesase Control, Fentanyl is a synthetic opioid pain reliever. It is many times more powerful than other opioids and is approved for treating severe pain, typically advanced cancer pain. It’s the drug that allegedly led to pop singer Prince’s death.

According to the CDC, from 1999 to 2013, the amount of prescription opioids dispensed in the U.S. nearly quadrupled.  The number of drug overdose deaths has never been higher, and the majority of these deaths — more than six out of 10 in 2015 — involved opioids.

Dowdy said education is the key to reducing the use of opioids — both legally prescribed and illegally obtained.

“It’s an urgency for us,” he said. “People’s lives are being destroyed.”

He said most people who are addicted to opioids probably start with a legal prescription. But they’re highly addictive, which can lead to a problem for the user. Use can turn to abuse.

“The addiction of opioids is no different than crack cocaine,” he said.

As a user’s physical need for the drug increases, they’ll look for other ways to get it, such as doctor shopping to get multiple prescriptions written to fill, or buying it illegally on the street, he said.

The going rate for a pain pill on the black market is about $7.50. Most abusers need to take several a day to keep their pain at bay, he said.

Dowdy suggests that doctors and pharmacists use the Mississippi Prescription Monitoring Program which is a statewide electronic database which collects designated data on substances dispensed in the state.

“We do that if we don’t know somebody,” she said.

She can check a customer’s prescription history for not only Mississippi but other states as well.

Once she noticed a customer had already had what she considered an excessive amount of prescriptions filled for painkillers so she called the dentist who’d written the most recent script.

“He didn’t know,” she said. He cancelled that prescription and looked at an alternative for his patient, she said.

Boatright said painkiller addiction can happen to anyone.

Dowdy believes that doctors could help curb the problem if they make changes in the way they prescribe pain medications.

“We’re not trying to tell doctors how to practice medicine,” he said.

He suggests limiting the number of pills in a prescription and not allowing refills automatically.

That’s what Dr. Jeff Ross, the chief medical officer for King’s Daughters Medical Center does. He’ll prescribe 12 to 15 pain pills with no refills. He cautions other doctors to do the same.

Maybe that can help keep someone from becoming an opioid addict.

“People turn to things that change how they feel on the inside,” he said. “It’s very easy to become dependent on these things. The real solution has to be more of a social program to allow more people to get into some sort of treatment that’s effective.”

What’s alarming to Ross is the rise in heroin drug abuse in the state. With prescription opioids, the pills are at least FDA approved. With heroin, “people put in it whatever is cheap,” he said.

In 2016, there were 275 seizures of heroin in the state, Dowdy said. In the past, drug traffickers regularly traveled I-10 and I-20 traveling from Texas to Georgia and Florida. Now it’s moving through the state on I-55 and Hwy. 49.

“It’s not leaving the state,” he said.

Ross is right that opioid abuse can lead to death.

Dowdy said MBN is trying to get accurate data on how many people are dying from overdoses of opioids.

State law requires coroners to report drug-related deaths to MBN. In 2016, 26 coroners reported 99 overdose deaths. That’s figures from 26 of the 82 counties. Yet for that same period of time, 211 death certificates were filed with the Bureau of Vital Statistics that listed drug overdose as the cause of death, he said.

Dowdy said he’s trying to “get some kind of teeth” to the statute to get more coroners to comply.

From January to June, no overdose deaths have been reported in Lincoln County, he said.

In the state, there were 563 drug deaths in the past four years, Dowdy said. At least 481 of those — 85 percent — were opioid related.

Dowdy said the state, through a grant from the Department of Mental Health, is distributing Narcan, an opiate antidote, to first responders and law enforcement agencies. They’re targeting the areas with the highest number of overdoses.

Doctors’ use of Narcan at KDMC has increased, Ross said. It is used “a couple times a month” in the emergency room and by emergency medical services, he said.

Lincoln County Sheriff Steve Rushing said his deputies don’t carry Narcan yet, but they’ll be trained soon and he expects they’ll be equipped with it by the end of the year.