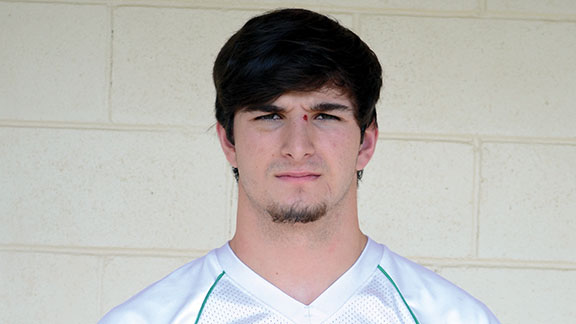 Gabe Nations of West Lincoln poses for a picture at West Lincoln High School. The two-sport star has been named to the Primetime 23. (Photo by Dylan Rubino)

It was in the seventh grade that West Lincoln rising senior Gabe Nations realized he could be good at football.

Sloane Nations, Gabe’s older brother, always pushed his little brother around and forced him to stay in the weight room to get stronger and better as an athlete.

That brother-to-brother relationship got Gabe Nations to the point where he is now.

Nations is a standout athlete in both football and baseball for West Lincoln and he’s continuing the family tradition of athletic excellence.

“My whole family went to West Lincoln so this is a big deal for me,” Nations said. “My older brother always told me when I was in junior high to get in the weight room or he would beat the crap out of me if I didn’t. He pushed me to get better and that’s usually why I’ve done everything I’ve been doing, just to be better than him.”

The rising senior tight end and defensive end for the Bears is an important piece in the success of the football program.

His important role and past success has landed him on the Primetime 23 for the first time in his career.

“I’m really happy that I made the Primetime 23,” Nations said. “We’ve got a bunch of athletes on our team that work really hard. We’ve got a really good team and I like playing with all of these guys.”

Nations joins teammates Chase Owen and Le’darrius Jones on the Primetime 23 for the upcoming football season. Nations grew up with Owen and Jones and knows the hard work the three put in would finally pay off.

“They’re really good friends of mine,” Nations said. “They always help you out and they cover for you when you’re on the field. Everyone is a team player out there. It’s not just for one guy. It’s for everyone out there. I always want to play for them.”

It was a tough season for West Lincoln last year as the Bears finished the regular season 2-8 overall and missed the playoffs. It was especially tough for Nations after suffering a concussion against Bassfield and as a result, missed the next three games of the season.

“It was really tough last season watching my teammates play and fight while I was sitting on the sidelines,” Nations said. “I didn’t like doing that at all.”

Nations came back for the game against Enterprise and helped the team pick up a crucial 20-13 win over their Lincoln County rival to move to 2-7 on the season.

Getting back on the football field was a feeling of joy and relief for Nations and his impact on the field helped pick up an important win for the West Lincoln community.

Last season was painful for the Bears and the leaders on the team, but new head coach BJ Smithhart comes in with a winning attitude and a new philosophy.

Nations and the rest of the leaders have already felt the impact over the summer.

“We’ve been practicing differently and harder than we have been in the past,” Nations said. “We’ve grown up a lot more. We’ve practiced a lot more than we’ve had last summer. It’s been really helping everyone out.”

Smithhart comes from a successful run as the head coach at St. Aloysius High School in Vicksburg, including two district championships and one state title appearance for the Golden Flashes.

As an outfielder for the baseball team, Nations hit an impressive .425 average on the season with 31 hits and 23 RBIs.

The baseball team has been very successful over the past couple of years and Nations hopes to bring the success onto the gridiron.

“I always tell the guys winning is a lot better than losing,” Nations said. “Hopefully they’ll learn that.”

Nations is a big guy standing at 6-foot-5 and towers over most of the players on the team. Nations has a cut on his nose from breaking it a couple of months ago, but he’s not ashamed of it.

“I guess it’ll make me look tougher,” Nations said. “Hopefully it does.”