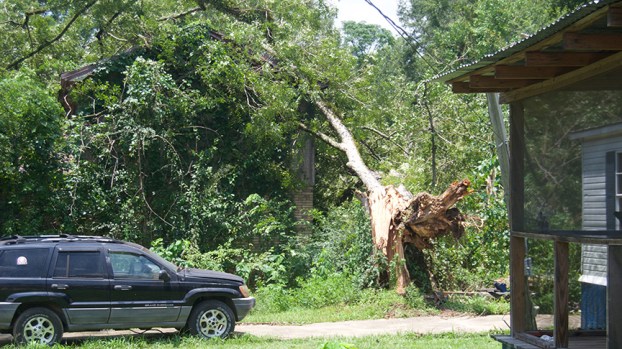 Photo by Donna Campbell/During Monday’s storm, a tree fell on the back end of a house on Center Street near Center Street Church of Christ. There were no other reports of damage to homes in Brookhaven or Lincoln County.

A thunderstorm that rolled quickly through Brookhaven Monday night brought with it damaging winds and some rain.

Though not a lot of rain fell, it came down in thick sheets that blanked the city in waves and made for poor visibility.

Power flickered in a few places downtown, though some went out and stayed out, leaving 2,180 customers without electricity, said Bill Howard, a spokesman for Entergy.

“Most of the outages came from limbs falling on power lines,” Howard said. “We brought in additional crews to help us.”

Power was restored to all customers on Tuesday.

Brad Bryant, a meteorologist with the National Weather Service in Jackson, said that there was a front coming in from the north that may have been the cause of the storm.

“Towns in southern Mississippi are right on the edge of a front coming through,” Bryant said. “It’s not a true front, but being right on the edge of this ridge, you’re able to have enough moisture and potential for severe weather. There is more heat and wind energy right around that ridge. Interaction of this ridge is coming in and boosted that storm to severe levels.”

Lincoln County Emergency Management Director Clifford Galey reported damage from a tree which fell on cars in Brookhaven. Keith Lewis, the city’s public works director, said a tree fell on the back end of a house on Center Street near Center Street Church of Christ. There were no other reports of any other damages to homes in the city or county.

Because of the high temperatures, isolated thunderstorms and showers are still likely.

“This will probably be some of the warmest temperatures that we’ve seen this summer going into the later half of the week,” said Mike Edmonston, an NWS meteorologist.

“We’re looking at heat indexes in the 100s, and temperatures in the upper 90s by the end of the week. Combine the heat with the humidity, there will still be enough residual moisture to get isolated showers and thunderstorms.”