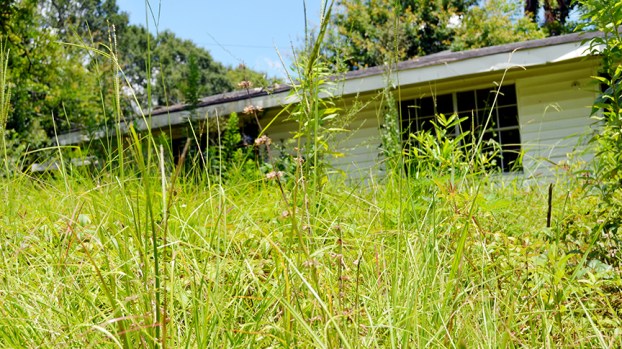 Photo by Matt Rushing/Owners of dilapidated buildings — like this one on Weems Street — and unkempt vacant lots have been given deadlines by city inspector David Fern to have the properties cleaned up before the city takes more drastic measures.

City of Brookhaven says it’s time to clean up properties

Owners of dilapidated buildings and unkempt vacant lots should get ready to pay hefty fines.

The Brookhaven Board of Alderman Tuesday approved a $250 fine levied to property owners each time the city is forced to mow their overgrown yards or lots.

Building inspector David Fern hopes the fine will get people’s attention so they’ll start mowing their grass or hire someone to do it for them.

“We will send them letters letting them know we’ve done this and they need to pay it and if they don’t pay their fine within a particular time frame, we will increase the fine by 25 percent and then charge it as a lien against their property,” he said.

Overgrown yards and lots was not the only issue on the table for the newly-seated board. They’re tackling nuisance properties as well.

A public hearing has been set for Aug. 1 at 5:30 p.m. in the city’s boardroom at the Lincoln County Government Complex for owners of properties that are on Fern’s list.

“We send letters out letting them know that this needs to be cleaned up in a certain time frame,” Fern said. “There is a list that board members have come up with, and myself by riding around, that need to be dealt with or we may have to start tearing down properties.”

Brandon Cobb, supervisor for Vector Mosquito Control in Brookhaven, gave a brief report to the board about why annexed areas of the city weren’t being sprayed.

“We didn’t have the annexed map of Brookhaven when we first started,” Cobb said. “We have corrected the problem and started spraying the additional areas. We spray the entire city at least once a week.”

Vector, which recently received the mosquito control contract for the city, is opening an office on Court Street behind The Daily Leader. They will have an office number set up in the next week, Cobb said.

Cobb will give another update to the board Aug. 15.

Public Works Director Keith Lewis updated the board on the new LED lights going up throughout the city.

“If you notice on the boulevard from the movie theater to Walgreens, the lights have been replaced with LEDS. We’ve also replaced lights from the airport to the new baseball field complex on Belt Line Drive,” Lewis said. “We’re trying to get them out there so people can see them and see what’s going on.”

• Mike McKenzie, of WGK Engineers, gave an update on projects including an improvement project at the Brookhaven Water Treatment Plant. Greenbrier Digging Services LLC is the contractor. The board approved pay request No. 2 on the project in the amount of $28,405. McKenzie said they’ve only completed about $70,000 worth of improvements on a $1 million job.

• Patrick Graham and Frederick Fairman were hired as part-time season workers for the cemetery department at $9.18 an hour.

• Anthony Cline was hired by the street department as a CDL driver at $10.89 an hour.

• The board approved payment to Natchez Fence for replacement and repair to the fence and gate at the Brookhaven Airport for $10,882.63 and to Oliver Street Sewer Cleaning for $3,670.

• The board approved the refunding bond resolution, refinancing the series 2006 bonds.

• Jason Markham in the water department received a $1-an-hour raise on his  one-year anniversary.

The next Brookhaven Board of Alderman meeting will be Aug. 1 at 6:30 p.m. in the city board room.

The 43rd annual Ole Brook Festival is still more than two months away, but the deadline to reserve vendor spaces... read more