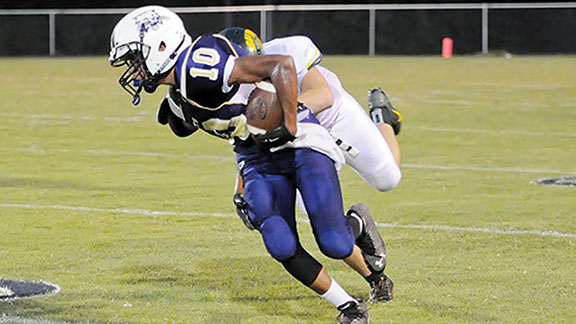 Bogue Chitto rising junior running back and defensive back Lafredrick Dillon (10) runs through a tackler in a game played last season. (Photo submitted)

Primetime 23: Lafredrick Dillon of BC

Bogue Chitto rising junior running back Lafredrick Dillon learned a lot from his older brother on the football field.

The 2016 season was the last time Lafredrick and Dee Dillon played together on the football field as Dee Dillon graduated in May and moved on from the program.

The two have always been standout athletes growing up in the Bogue Chitto community and with Dee Dillon moving on, it is Lafredrick’s turn to pick up where his brother left off.

“They learned to compete with each other from a young age,” Bogue Chitto head football coach Gareth Sartin said. “They always try to out-do each other in practice and at home. With Dee starting for us the last couple of years, I’m sure Lafredrick would like to out-do his brother in the starting lineup.”

“Dee always taught me to stay strong and keep on fighting,” Dillon said. “Push through and persevere and it’ll be alright.”

As a running back, Lafredrick Dillon sat behind Henry Thomas and Damarcus Godbolt on the depth chart and split carries with the two backs. For the 2016 season, Dillon rushed for 159 yards on 23 carries and two touchdowns. Dillon also reeled in seven catches for 146 yards and two touchdowns.

Dillon is slated to be the starting running back for Sartin and the Bogue Chitto Bobcats with Godbolt playing fullback.

Dillon has been selected to the Primetime 23 for the first time in his career.

“Lafredrick can really step up and run the ball a lot for us,” Sartin said. “He’s going to be one of our main running backs. Not only can he play offense, but he’s a really good cornerback that’s not scared of being physical and making contact.”

“It’s an honor for me to make the Primetime 23,” Dillon said. “I worked really hard for this and I’m glad it paid off.”

Dillon returns to Bogue Chitto as the second leading tackler on defense. At cornerback, Dillon had 48 total tackles with two interceptions for the 2016 season.

His play-making ability on both sides of the football makes him a key player to the future success of Bogue Chitto football.

“He’s got such great talent on offense and on defense,” Sartin said. “He’s not a big, bruising type of player, but he’s fearless and he has a very aggressive nature as a football player and we like that.”

As one of the smaller players on the team, being more aggressive helps when a player lacks size.

One thing Dillon worked on in the offseason was getting stronger and more in shape to handle the work load of being the top running back.

“He needs to continue on building up his strength to become more durable,” Sartin said. “He’s not a big, bruising back by any means, but he needs to bulk up to take those bruises and stay healthy.”

“I’ve basically just been staying in the weight room and I keep on grinding,” Dillon said. “If I get my weight up, I can have a really good season.”

After not getting the majority of the carries last season, expectations are high for Dillon as the lead running back on offense. The defensive side of the ball is where Bogue Chitto needs to improve the most and it all starts with Dillon in the secondary.

“If he keeps on working in the offseason, he has a chance to have a really good year,” Sartin said. “He’s a smooth running back with really good vision. He has a lot of big play potential and he’s a talented corner, so he can have a really solid year for us.”