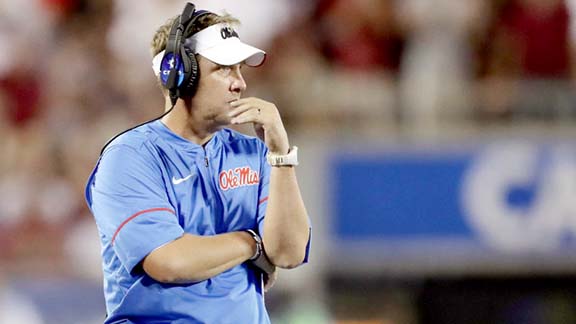 Hugh Freeze’s fall from grace is a steep one

There have always been rumors surrounding former Ole Miss head football coach Hugh Freeze.
Many speculations were tossed around during Freeze’s tenure in Oxford, and that all picked up over the past few weeks.
It has been reported that information about Freeze’s personal life was brought to Ole Miss’ attention as early as this past fall. The rumors started to really escalate last season. Oxford is a city with a population of almost 25,000 people and it’s hard not to listen to the chitter-chatter that goes on in a bustling college town.
In the end, a “less than one minute” phone call to an escort service in Tampa Bay, Florida is what ultimately ended Freeze’s tenure.
The roller coaster coaching career came to an abrupt end Thursday evening after Freeze resigned from his position after five years at the helm of the Rebels’ football program.
Ole Miss athletic director Ross Bjork said Thursday night there was no buyout with Freeze’s resignation and he would’ve been fired if he refused to resign.
Chancellor Jeff Vitter and Bjork were willing to go to war with Freeze against the NCAA, but in the end, a short phone call did him in.
Ole Miss dug into Freeze’s phone records and found “a pattern of significant behavior,” as stated by Bjork that led to Freeze’s resignation from the football program.
With two Notice of Allegations from the NCAA handed down on Ole Miss, it was clear their motive was to get Hugh Freeze out of Oxford for good.
The second NOA charged Freeze with failure to monitor and a lack of institutional charge.
What’s ironic about this is Freeze’s shocking dismissal had nothing to do with the NCAA investigation, but from his own wrongdoing.
As soon as Freeze arrived in Oxford, he built himself up as a strong man of faith. He recruited kids based on faith, family and love for one another.
Freeze was a rock star in Oxford. He took down Alabama two years in a row, the gold standard of the Southeastern Conference.  In 2015, Freeze led the Rebels into Starkville and took down Mississippi State to advance to their first Sugar Bowl birth since Archie Manning was the quarterback. The Rebels defeated Oklahoma State in the 2016 Sugar Bowl by four touchdowns.
That Sugar Bowl victory was he last time anything positive came out of Oxford.
Freeze made $5 million a year as the head coach of the Rebels. His daily Bible verse tweets he sent out to his 190,000 followers won a lot of people over and at the same time, it pushed some of them away.
The Houston Nutt lawsuit against Ole Miss isn’t what did Hugh Freeze in. Freeze did himself in and he has nowhere to look but in the mirror when placing blame.
I feel bad for his wife Jill. I feel bad for his three daughters, ages 18, 17 and 14. I can only imagine what they’re going through right now with all of the negative news surrounding their family.
Interim head coach Matt Luke has an almost impossible task at hand to right the ship for the Rebels in 2017, but this is an opportunity he’s been waiting for and he’s going to make the most of it. Luke has everything to gain in 2017.
You Might Like

Primetime 23: Lafredrick Dillon of BC

The Primetime 23 recognizes the 23 best football players for the 2017 football season in the area. Bogue Chitto rising... read more